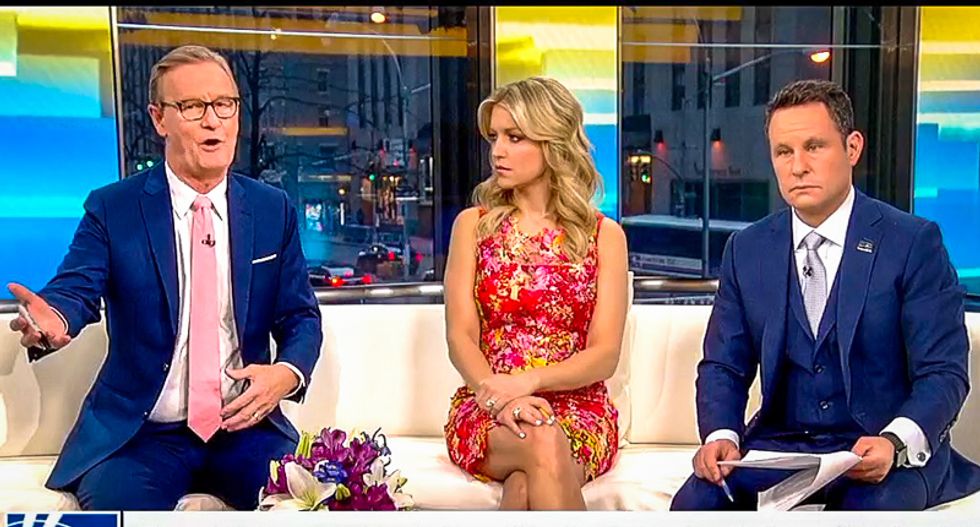 The hosts of "Fox & Friends" on Wednesday tried to imagine why celebrities would make political statements if they didn't necessarily translate into votes.

Actor Robert DeNiro drew the president's wrath by profanely denouncing him during the Tony Awards, and the Fox News hosts griped that conservatives would not have been able to say the same thing about former President Barack Obama.

Brian Kilmeade thought President Donald Trump should have ignored DeNiro, but he praised him anyway for slurring the actor as "punch-drunk."

"I was just thinking to myself it's so good that the president was giving Robert DeNiro the Eminem treatment of ignoring him, and then last night these tweets came rolling in from Air Force One," Kilmeade said, cackling with delight as he read the tweets aloud.

Earhardt pointed out that DeNiro's "f*ck Trump" statement was bleeped out by the network.

"Don't you want your message heard?" she said. "His message was bleeped the entire thing. You didn't know what the message was if you were watching it."

Kilmeade pointed out that celebrities like Jay-Z and Beyoncé had backed Hillary Clinton, but she lost anyway.

"It doesn't convert to votes," he said.

Earhardt, who claimed she hasn't seen a movie since becoming a parent, said Americans didn't care about the movie stars they pay to see act in films.

"You hear people in the middle of the country, they say we don't care about these celebrities," she said. "They don't relate to us. Let them all come out because it backfires on them."

Co-host Steve Doocy then gloated over the president's remarks.

"If you are a Republican yeah, Hollywood, keep it up," Doocy said. "Clearly they have been so out of touch with mainstream media, -- mainstream America. Does Hollywood reflect your personal political point of view and do you listen to them? That's what Robert DeNiro really matter? I mean punchy, does that really matter what punchy says?"