‘This is a flat out blunder’: Nancy Pelosi ridiculed for calling out Maxine Waters as ‘unacceptable’ 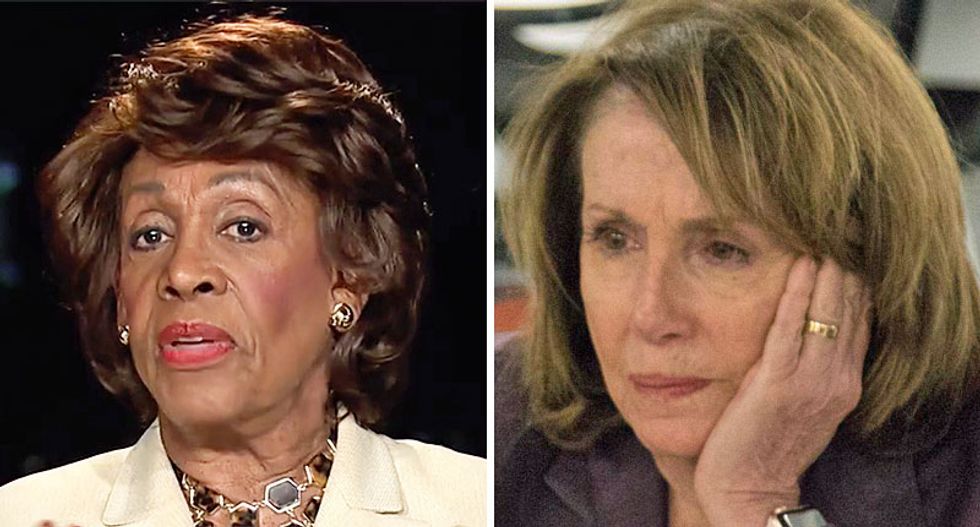 The debate within the Democratic Party over how to react to President Donald Trump erupted on Monday as House Minority Leader Nancy Pelosi (D-CA) publicly scolded Rep. Maxine Waters (D-CA) for calling on citizens to publicly resist administration cabinet officials.

At a weekend rally, Rep. Waters urged citizens to hold individual members of the administration to account.

“Let’s make sure we show up wherever we have to show up. If you see anybody from that Cabinet in a restaurant, in a department store, at a gasoline station, you get out and you create a crowd and you push back on them and you tell them they’re not welcome anymore, anywhere," Rep. Waters urged.

The Democratic leader labeled such resistance as "unacceptable" in a Monday tweet.

"In the crucial months ahead, we must strive to make America beautiful again. Trump’s daily lack of civility has provoked responses that are predictable but unacceptable," Rep. Pelosi lectured. "As we go forward, we must conduct elections in a way that achieves unity from sea to shining sea."

There was also a racial element that did not go unnoticed.

"I'd be careful not to throw black women under the bus. As a privilege white woman, you don't get to choose how black folks respond to white supremacy that doesn't threaten your personal safety," counseled Terrell J. Starr, a reporter at The Root.

Many of the replies showed Pelosi's Twitter followers choosing to stand with Rep. Waters.

"I'm a big Pelosi supporter. This is a flat out blunder," explained Tom Watson. "She should clarify today."

Here are some of the other responses in the debate over shunning individual members of the Trump administration:

@NancyPelosi Now you're stupidly attacking our own rather than demanding an answer to where the missing babies and girls are.
— WriterNYC (@WriterNYC)1529939684.0

@NancyPelosi Always respect for you Nancy, but on this one, I am with @RepMaxineWaters. You cannot meet fire with… https://t.co/sdmrmKXNqa
— Sheryl Wragg (@Sheryl Wragg)1529939725.0

@NancyPelosi Civil Disobedience is a legal and effective expression of #Resistance. When the Government is the ins… https://t.co/KobXwPjqUI
— On The Case Man 🇺🇸 (@On The Case Man 🇺🇸)1529939527.0

@NancyPelosi If you run on unity from sea to seas rather than stopping the evil of the Republican party, you'll lea… https://t.co/rUy78jsOFV
— Dave Hogg (@Dave Hogg)1529941616.0

@NancyPelosi No, Nancy, we need leadership to call out this attack on American norms and traditions amidst this sli… https://t.co/YvioJbZo4R
— Jonna 🇺🇸🌊 (@Jonna 🇺🇸🌊)1529940159.0

@NancyPelosi @PNewmanBennett It’s time for you to resign @NancyPelosi. Clearly you are not up for the task of fight… https://t.co/hwEhj0GoZQ
— Roller Rebel (@Roller Rebel)1529940165.0