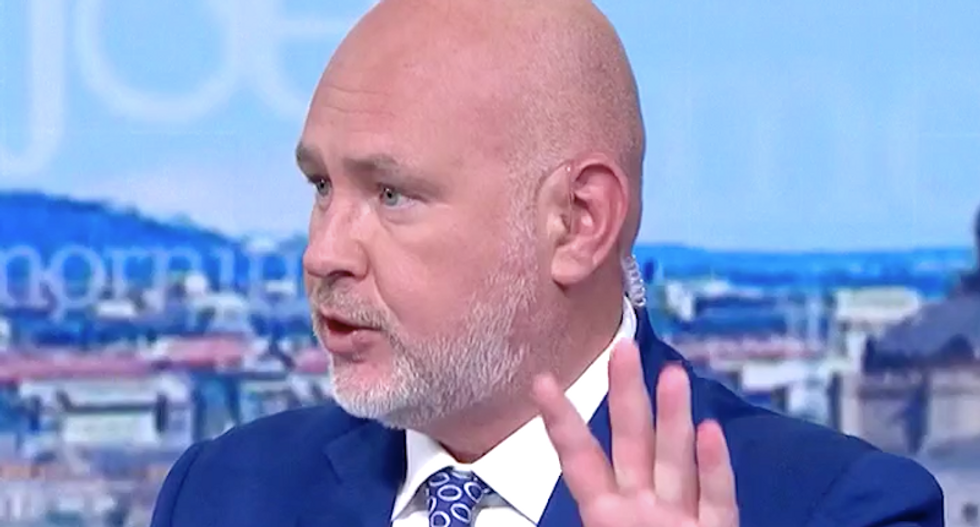 Schmidt reacted to the tweet in real time after MSNBC's Mika Brzezinski read it aloud on "Morning Joe" moments after the president posted the legally dubious claim.

"So we have two things connecting here," Schmidt continued. "First is Donald Trump's basic assertion that what I say is true -- straight out of '1984' when Winston, right, is being interrogated by the party officials and the party official has four fingers in the air, and Winston after being tortured says, 'I only see four fingers.' The party officials say, 'It can be three, it can be five.' You combine that where the president is basically asserting what I say is true, what I believe is true, despite any material facts along with the legal assertion that I am the law, and those two things are profoundly disturbing."

Host Joe Scarborough assured his guests that the U.S. Supreme Court would reject the president's claims to "absolute" power, but former U.S. Attorney Joyce Vance warned that he couldn't be so sure.

"I hope you're right about the Supreme Court, and I do think that you're right that they would be that last blasting of hope for us, but by the same token I take the president's letter very seriously and his tweets, as well," Vance said.

She said the president was gradually softening resistance to his abuses of power, and she feared where he was leading Americans with his outrageous tweets.

"He's made these sort of off-the-wall sorts of claims before, and people have thought, 'Well, he won't go that far, no one's going to separate mom from babies at the border,' and here we are," Vance said.

"When I was looking at a target in a case or a subject in negotiating with his defense lawyer, we talked about whether or not there was probable cause to indict his client," Vance said. "We never talked about whether his client was above the law, and this is the dangerous sort of paradigm that President Trump and his lawyers are setting up, this fundamental focus that he is above the law."

"We all know that the Supreme Court will reject that," she added. "They are running it as a public relations strategy trying to confuse the American people, and it's disgusting to see that coming from a president who should be protecting us."