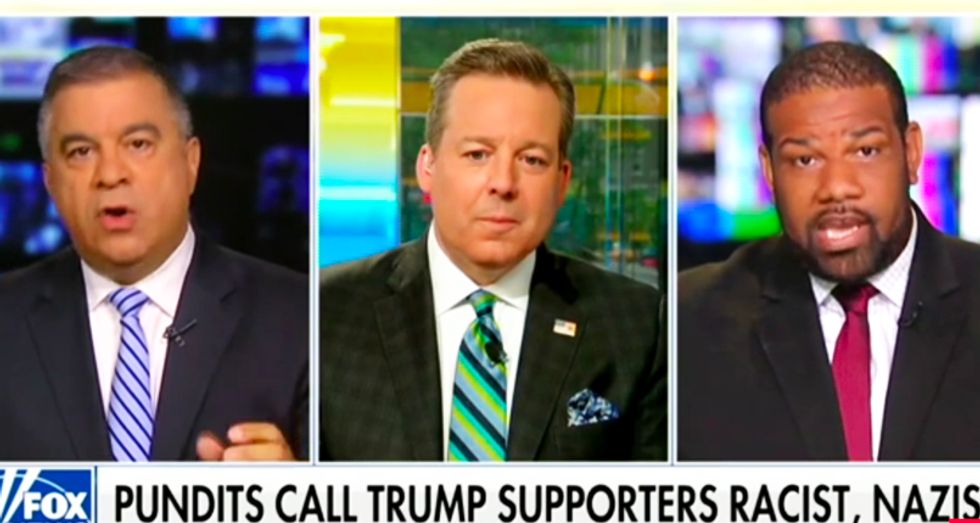 Fox News host Ed Henry had to shut down a discussion on President Donald Trump's immigration policies on Sunday morning when White House adviser David Bossie told a black Democratic consultant that he was out of his "cotton-picking mind."

"“Yeah, that liberal Michael Hayden,” Payne shot back, sarcastically referring to the fact that Hayden is a conservative.

"You are out of your cotton-picking mind!" Bossie blurted, causing Payne to blow up.

Host Henry tried to take control as the two guests began yelling at each other, with Henry insisting Bossie intended to say "out of your mind," before he called an end to the panel.

"I just want to address what happened in that debate, it obviously got fiery, David Bossie used a phrase that clearly offended Joel Payne and offended many others. I don’t know what David meant by it.," Henry offered. "You know, what went back and forth between the two of them. I’ve known David a long time. I’ll let him address exactly what he said. But I want to make sure that Fox News and this show, myself, we don’t agree with that particular phrase."

"It was obviously offensive and these debates get fiery, that’s unfortunate. We like to have honest and spirited debates, but not phrases like that, obviously. And so I will just leave it at that," he added.

In an email sent to Raw Story, David Bossie apologized for his comments:

"During a heated segment on Fox & Friends today, I should have chosen my words more carefully and never used the offensive phrase that I did. I apologize to Joel Payne, Fox News and its viewers," he wrote.

(Note: This article was updated with a statement from David Bossie)

Donald Trump didn’t just conspire to overturn the election. He ripped off his own supporters while doing it.

Treason, it turns out, is a lucrative endeavor.

‘Desperately’: Trump ‘wanted to walk into the House with an armed mob’ says Yale historian

The revelations from former Trump White House aide Cassidy Hutchinson are being called "bombshells" and, according to a former advisor to the U.S. House Select Committee on the January 6 Attack, a "cluster bomb."

But one Professor of History and American Studies at Yale University, Dr. Joanne Freeman, is urging Americans to focus on an important part of Hutchinson's testimony.