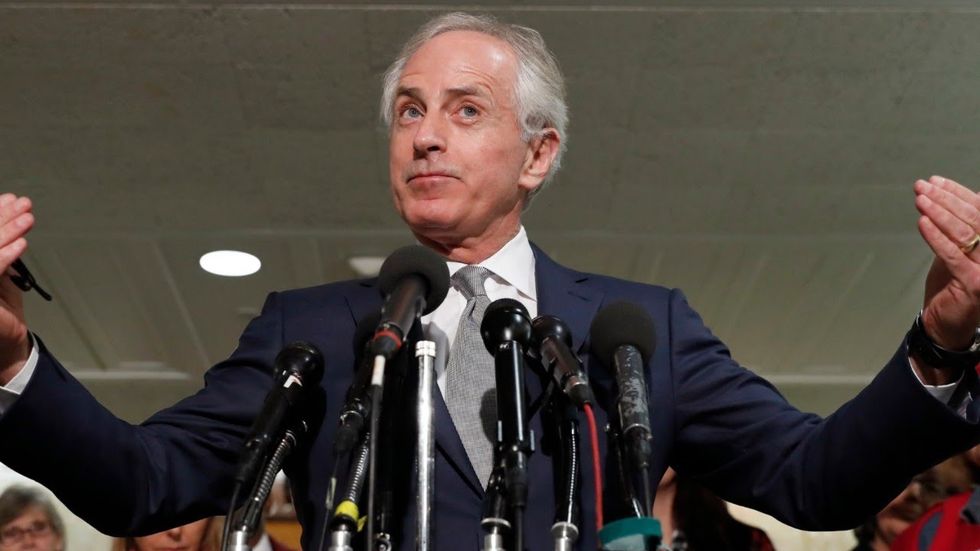 Sen. Bob Corker (R-TN) on Tuesday afternoon blew up on the floor of the Senate at his colleagues who are too afraid of the president to bring tough legislation to the upper chamber of Congress.

He began his tirade by noting that in the past year and a half, under the leadership of Senate Majority Leader Mitch McConnell, the chamber had brought very few amendments to the floor. Instead, he suggested, his fellow Republicans keep blocking bills out of fear of how President Donald Trump may view them.

"We've been here a year and a half and because senators, United States senators that are elected by the people in their state,don't want to cast a tough vote, they block everybody from voting," he charged.

Last week, Corker introduced an amendment that would counter some of Trump's recent tariffs, and the senator said that although he believes a vast majority of Republicans agree with him, they're too afraid to vote on it. Instead, the bill known as the Corker Amendment has been blocked by his fellow Republicans.

"I heard the senator from Texas, the senior senator from Texas, saying the other day, 'Well, gosh, we might upset the president,'" Corker recounted, referencing Sen. John Cornyn (R-TX), the Senate's number two Republican. "We might upset the president of the United States before the midterms. So, gosh, we can't vote on the Corker Amendment because we're taking, rightly so, the responsibilities that we have to deal with tariffs and revenues."

"We can't do that because we'd be upsetting the president, the president of the United States," he continued.  "I can't believe it."

Corker claimed that a lot of Senate Republicans would vote for his amendment restricting the president's tariff powers if it came to a floor vote, but they continued to block it.

"No, no, no, gosh, we might poke the bear, is the language I've been hearing in the hallways," the Tennessee Republican said. "We might poke the bear. The president might get upset with us as United States senators if we vote on the Corker Amendment, so we're going to do everything we can to block it."