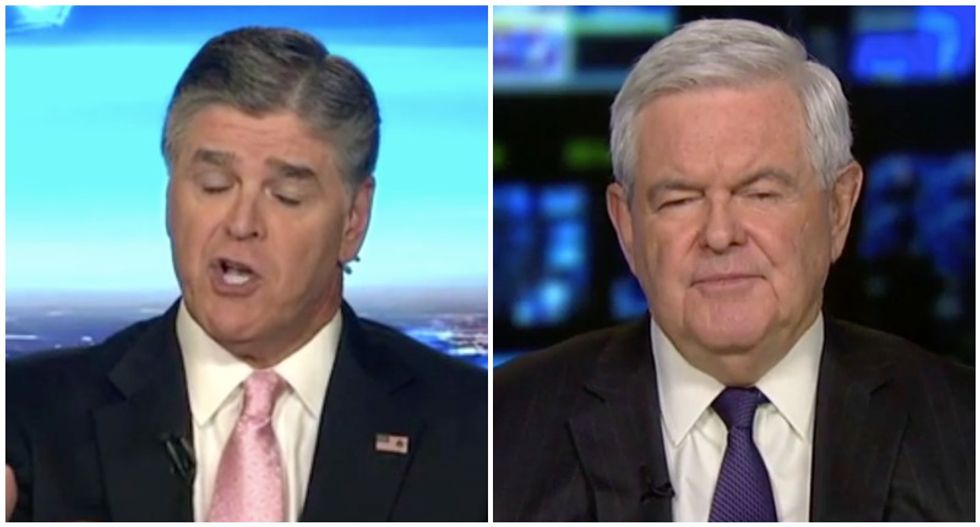 President Donald Trump insisted Paul Manafort had "nothing to do" with the Republican presidential campaign he chaired -- but an old Sean Hannity clips suggests otherwise.

The president's cable news cheerleader and late-night confidante hosted Newt Gingrich, another prominent Trump apologist, to discuss what they described as "Trump's most powerful week since entering race" on Aug. 19, 2016 -- the day Manafort resigned as campaign chairman.

"I thought Paul did an important job, getting through the convention and getting the campaign more of a national campaign, more of a professional campaign," Gingrich said. "My guess is Paul was being very generous in recognizing that although the news media was never going to let up on whatever happened in Ukraine, unlike their willingness to ignore Podesta and Clinton and Russia. So I think, probably, in that sense that this was the right outcome."

"Nobody should underestimate how much Paul Manafort did to really help get this campaign to where it is right now," Gingrich added.

Hannity signaled his agreement before moving on to a Trump campaign speech on black unemployment, but he thought enough of Gingrich's praise for Manafort that he highlighted a quote on his personal Twitter account.

Manafort was jailed Friday after a judge agreed he had violated the terms of his bail by attempting to influence witness testimony in the special counsel case against him, and the president distanced himself from the former campaign chairman once praised by his close allies.

“I feel badly about a lot of it because I think a lot of it is very unfair,” Trump said. “Manafort has nothing to do with our campaign. But, I tell you, I feel a little badly about it.”

Trump also claimed Manafort worked only 49 days on his campaign -- which was inaccurate.

Manafort, in fact, worked -- without pay, despite his mountainous debt at the time -- for the Trump campaign for 144 days, starting March 28, 2016.

That's about two months longer than either Steve Bannon or Kellyanne Conway, who each worked 84 days on the Trump campaign.