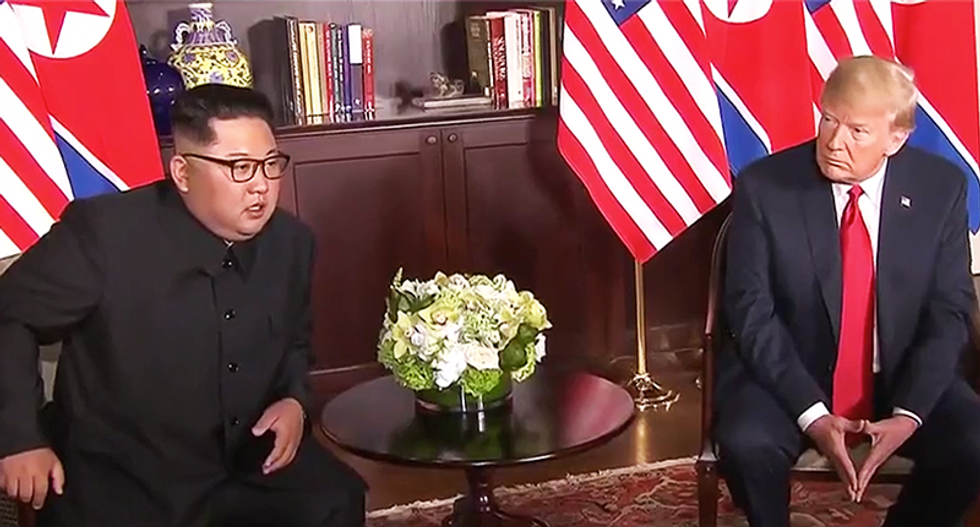 In an essay for Foreign Policy, Stephen M. Walt,  professor of international relations at Harvard University, said that  Kim Jong-un  has successfully portrayed himself as "irrational" which has lured world leaders like President Donald Trump into a false sense of superiority which has allowed the North Korean strongman to play them like a fiddle.

According to Walt, "The Singapore summit was long on theater and largely devoid of substance, save for a typical Trumpian giveaway. This time Donald Trump impulsively offered to suspend military exercises with South Korea (without notifying Seoul in advance) in exchange for a North Korean pledge to do … well, nothing."

Walt then took a shot at Trump -- the "author" of the ghost-written "Art of the Deal" -- by snarking,  "If the self-proclaimed master negotiator keeps making deals like this, there will be a Kim Jong Un Hilton in Honolulu before there’s a Trump Tower in Pyongyang."

"The most significant development in Singapore was to complete the transformation of Kim himself from a secretive, slightly comical, definitely murderous, and possibly irrational leader of a 'Hermit Kingdom' into a serious and engaged world leader of some stature," he added.

Noting a New York Times piece that marveled at Kim's transformation, Walt dismissed it out of hand.

"America’s self-defeating tendency[is]  to portray adversaries as irrational, crazy, deluded, risk-seeking, suicidal, or just plain nuts," he wrote. "Instead of seeing foreign-policy disputes as the product of straightforward conflicts of interest or clashing political values, even well- experienced U.S. officials and knowledgeable pundits are prone to seeing them as a reflection of personality defects, paranoia, or distorted views of reality."

"Similarly, many Americans continue to view international terrorists as deeply disturbed, irrational, deluded, or simply crazy individuals, instead of seeing them as politically motivated, calculating, and more or less rational actors who have adopted a particular tactic (sometimes including the use of suicide bombers) because they believe (with some basis) that it offers the best chance of realizing their political aims," he added.

He then wrote, "Some of the individual attackers may indeed be driven by wholly fictitious beliefs, but to dismiss these groups and their leaders as simply crazy underestimates their own resilience, strategic behavior, and capacity to adapt."

"And while we’re talking about perceived irrational behavior, Americans might want to be a bit more self-reflective. We like to portray our enemies as irrational and foolhardy, but we’ve been guilty of no small amount of crazy behavior ourselves," he continued.

He then turned back to the Trump/Kim summit.

"Lastly but by no means least, what are other states to make of a president who can’t get through a day without telling a bald-faced lie (or several), insults the leaders of our closest allies not just once but repeatedly, and who changes course so frequently that neither friends nor foes can be confident that an agreement reached today will be abided tomorrow," he wrote.

"Unlike some of his critics, I don’t think President Trump is crazy or in the early stages of dementia (although reading the clinical description of narcissistic personality disorder is more than a little worrisome). But based on his performance thus far, it’s easy to see why major world leaders might conclude that there was no point in trying to accommodate, mollify, appeal to, or compromise with a leader as capricious and vindictive as Trump," he suggested.

"Kim Jong Un seems to have demonstrated that one gets more respect from Trump by defying him than trying to get along. If other leaders reach the same conclusion, they will devote less effort to remaining on good terms with the United States and concentrate instead on building cooperative arrangements with each other," he warned before concluding, "At this point, they’d be crazy not to."

A Canadian woodchuck cast a different type of shadow over "Groundhog Day" Thursday -- just hours before he was due to predict spring's arrival, Fred la Marmotte was found dead.

The groundhog showed "no vital signs" when the organizer of the annual February 2 tradition in Val-d'Espoir, Quebec tried to wake him from hibernation, local media reported.

Florida Gov. Ron DeSantis has reignited his fight with one of his state's largest employers: Disney.

DeSantis, who had his 2009 wedding at Disney World, has been fighting with the company over the friendly peace-loving world they've created in the swamps near Orlando, the Miami Herald reported Thursday.