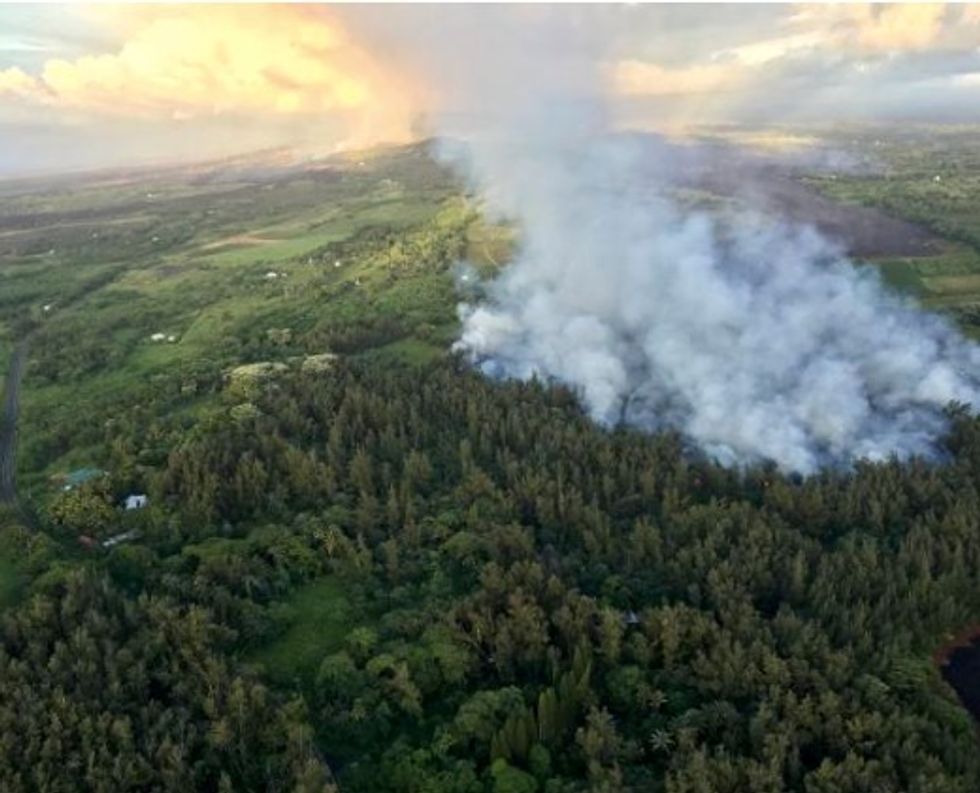 Fissure 8 continues to feed lava into multiple flow lobes advancing to agricultural land toward the northeast, as shown in this aerial view from a helicopter overflight in the vicinity of Kapoho Crater, Hawaii, U.S., June 1, 2018. USGS/Handout via REUTERS

As lava continued to pour vigorously from the ground through fissures at the foot of Kilauea Volcano, the month-old eruption on Hawaii’s Big Island has entered a new, seemingly calmer phase inside the summit crater, government scientists said on Friday.

But vulcanologists monitoring and measuring Kilauea’s every move during the past four weeks hastened to add the latest change in the volcano’s behavior, while undoubtedly significant, leaves them uncertain about what will follow.

The apparent reason, newly revealed in footage recorded by drone aircraft flown over the summit, is that tons of rocky material shaken loose from the inside walls of the crater vent have plugged up the bottom of the void, Anderson said.

What happens next is unknown.

“It’s possible that new explosions will blast through the rubble at the bottom of the vent, and these may or may not be larger than previous explosions,” he said. “It’s also possible that the vent could become permanently blocked, ending the explosions entirely.”

In any case, the volcano’s behavior ultimately hinges on the ebb and flow of huge rivers of molten rock called magma, the term for lava while it remains underground.

The steady collapse of the crater’s inner walls, caused by magma draining out of the summit and oozing downslope under the volcano’s surface, has also greatly enlarged the mouth of the vent, which has grown in size from about 12 acres (4.9 hectares) to 120 acres (48.5 hectares), Anderson said.

At the same time, the Kilauea summit itself has sunken, or subsided, by at least 5 feet (1.50 meters) in elevation as the magma level continues to drop, exerting tremendous pressure on seismic faults to create numerous earthquakes, mostly small tremors, in the immediate vicinity.

Although the summit crater of Kilauea has fallen silent for the moment, many of the two dozen volcanic fissures running through populated areas on its eastern flank continued to spout and ooze lava and toxic gases that prompted the evacuation of some 2,500 residents.

At least 75 homes — most of them in the hard-hit community of Leilani Estates — have been devoured by streams of red-hot molten rock creeping across the landscape since May 3. Lava flows also have knocked out power and telephone lines in the region, disrupting communications.

Another issue has been the occurrence of a phenomenon called Pele’s hair — fine, glass-like fibers of volcanic material produced by fountains of lava and carried aloft by the wind. The filament, named for the mythical goddess of volcanoes, can cause skin, eye and respiratory irritation like fiberglass.

Residents have been warned to avoid exposure to Pele’s hair, one of several airborne volcano hazards including emissions of sulfur dioxide gas, wind-blown ash and noxious clouds of laze — a term combining the words “lava” and “haze” — formed when lava reacts with seawater to form a mix of acid fumes, steam and glass-like specks.

The latest upheaval of Kilauea, one of the world’s most active volcanoes, comes on the heels of an earlier eruption cycle that began in 1983 and continued almost nonstop for 35 years, destroying 215 dwellings and other structures.