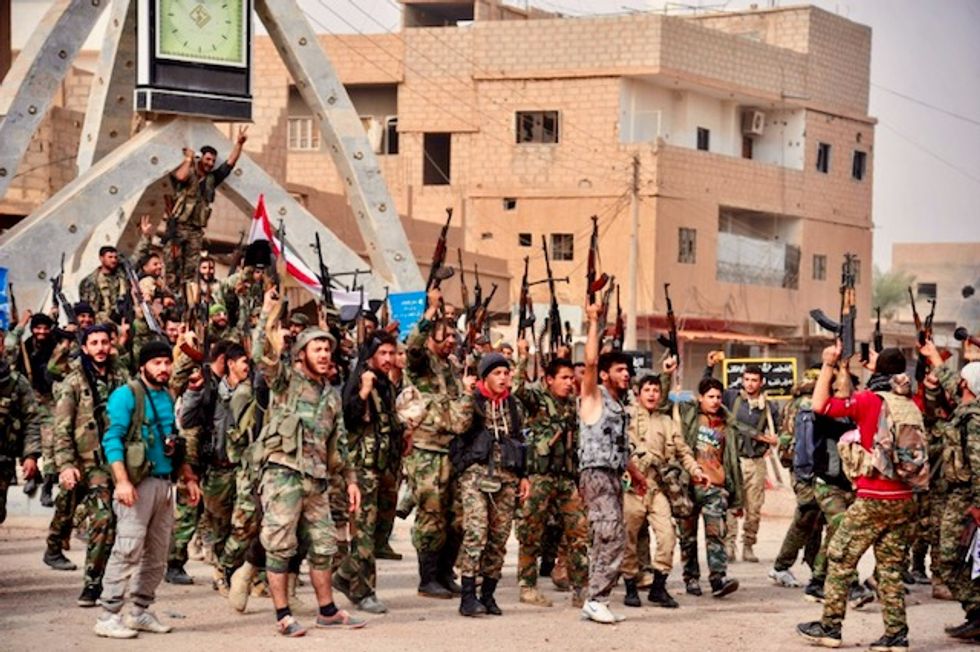 Syrian pro-government forces celebrate their recapture of the eastern town of Albu Kamal from the Islamic State group in November, 2017 SANA/AFP / Handout / STR

The Islamic State group seized parts of a key town on the Syrian-Iraqi border Friday in a massive operation that further confirmed the jihadists remain a force on the ground.

IS used at least 10 suicide bombers in its offensive on Albu Kamal, which lies in he Euphrates Valley in eastern Syria and swiftly took several neighbourhoods, the Syrian Observatory for Human Rights said.

The offensive is the latest in a string of IS attacks which confirm predictions that the jihadist organisation would continue to be a threat even after the collapse of its "caliphate" last year.

At least 25 government and allied fighters were killed in the operation, one of the jihadists' largest this year, said Rami Abdel Rahman, the head of the Britain-based Observatory.

"It's the biggest attack on Albu Kamal since they lost it" in November 2017, he said.

"IS now controls several parts of the city. Fighting is ongoing in the centre," he said, adding that at least 18 jihadists, including the suicide attackers, were also killed.

There was no immediate comment from the government camp.

The area was the heart of the once sprawling, self-styled "caliphate" IS proclaimed in 2014 and its recapture by pro-government forces last year was the final nail in the proto-state's coffin.

According to the Observatory, the jihadist organisation that once ruled a self-proclaimed state roughly the size of Britain now holds less than three percent of Syrian territory.

AFP / Delil souleimanFighters of the US-trained Syrian Democratic Forces gather at the Al-Tanak oil field on May 1, 2018 as they prepare to assault the Islamic State group near Albu Kamal in parallel with a Russian-backed campaign by pro-government forces

It faces parallel operations from US-backed Kurdish-led forces west of the Euphrates and Russian-supported pro-government forces on the eastern bank.

IS had on Sunday launched an operation on villages along the river that lie between Albu Kamal and the provincial capital Deir Ezzor.

According to the Observatory, at least 45 government and allied forces were killed in the offensive, mostly members of Shiite militia groups from Iraq and elsewhere.

The monitoring group said at least 22 pro-government fighters were also killed in an IS attack in a desert area of the southern province of Sweida on Thursday.

IS also launched an attack near the ancient oasis city of Palmyra last month after some of its fighters were transferred out of their last Damascus bastion of Yarmuk.

Observers had warned that the organisation likely had sleeper cells across the country that could launch deadly attacks against government forces, mostly in remote areas.

The "caliphate" as a jihadist statehood experiment had looked doomed ever since anti-IS operations started gathering steam on both sides of the Syrian-Iraqi border in 2015.

But analysts and military officers have always warned that IS fighters would revert to the guerrilla tactics they have mastered and continue to pose a threat.

The surge in attacks by IS comes at a time when the continued presence of US-led coalition forces in Syria is coming into question.

US President Donald Trump has vowed he would pull out his troops from Syria but Pentagon chief Jim Mattis had pleaded for a more patient approach.

A a meeting of NATO defence ministers in Brussels on Friday, Mattis warned that leaving Syria too soon would be a mistake.