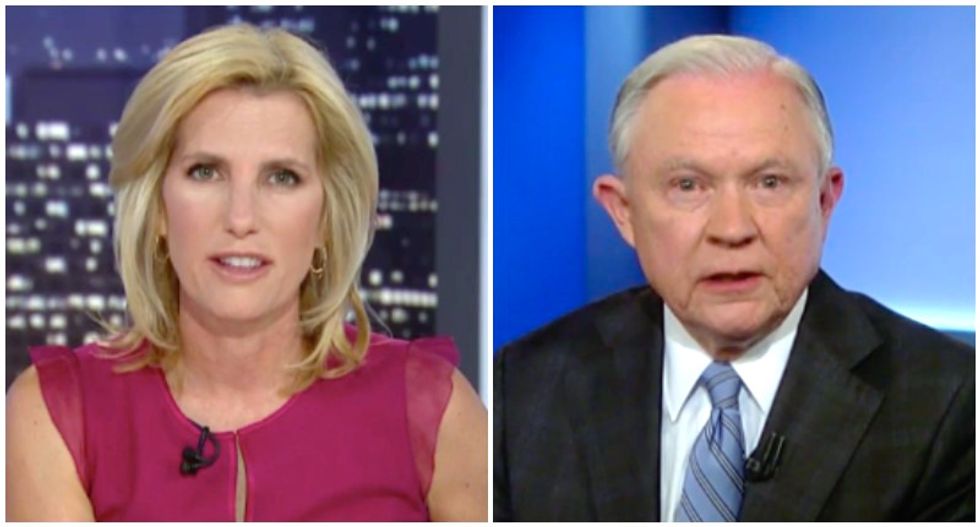 Attorney General Jeff Sessions went on Fox News to defend the separation of immigrant families -- by insisting the policy was nothing like Nazi Germany.

The attorney general appeared Monday night on "The Ingraham Angle," where he complained migrants were undermining the U.S. rule of law.

"We have watched what happened with the Obama policies, and over years, we went from 15,000 illegal entries to 75,000," Sessions said. "This is a huge loophole in our system that's attracting more and more people, as more and more people understand that, under previous policies, if they enter the country unlawfully, that nothing will happen."

Sessions insisted children were well taken care of after they were indefinitely separated from their parents, and he told host Laura Ingraham the Department of Health and Human Services spent about $1 billion last year taking care of children caught crossing the border.

The attorney general rejected comparisons between the detention centers and concentration camps in Nazi Germany as irrational and thoughtless.

"It's a real exaggeration," Sessions said. "In Nazi Germany, they would keep the Jews from leaving the country."

He agreed the family separations would serve as a deterrent to potential immigrants.

"Fundamentally, we are enforcing the law," Sessions said. "Yes, hopefully people will get the message and come through the border at the port of entry and not break across the border unlawfully."