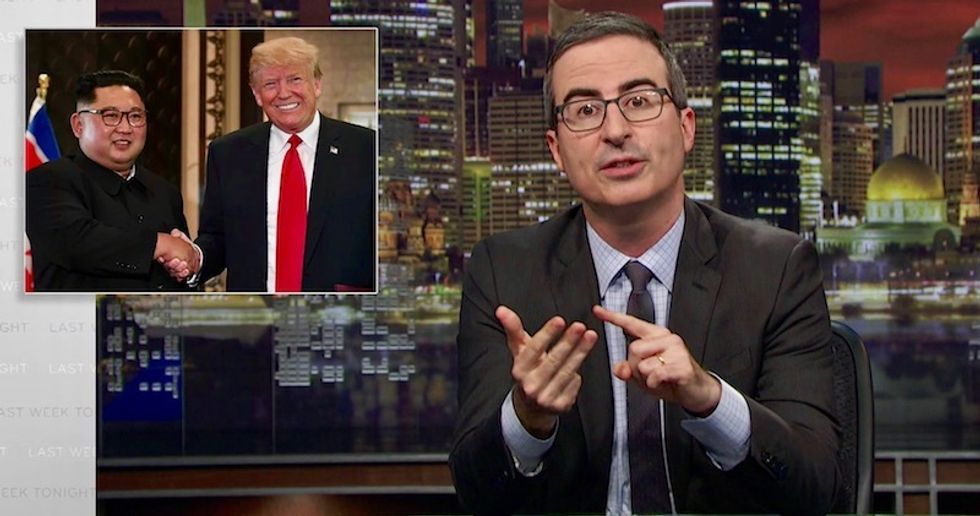 After President Donald Trump's summit in Singapore it became evident that the only person Trump seems to love more than Kim Jong-un is himself.

HBO host John Oliver explained that most diplomacy involves being pleasant "and sucking up to horrible people, Trump went above and beyond."

He then played a super-clip of the many compliments the North Korean dictator enjoyed from the American president.

"I'm not going to say Trump's admiration for Kim is that he wishes he could be a dictator as well. I'm going to let him say that," Oliver said before playing the clip of Trump confessing exactly that.

He went on to explain that the president admitting he wants to be a dictator is a "dire realization right up there with the robots have become sentient or the cat has power of attorney."

Trump's post-summit tweets congratulating himself on a job well done didn't do much for Oliver either. In fact, telling Americans to "sleep well tonight" induced more fright than relief.

"Donald Trump telling me I can sleep well tonight is like the Grim Reaper telling me to have a happy birthday," the late-night comedian joked. "His presence is the reason I will not."

Oliver went on to explain how underwhelming the "deal" made between the two men was that it consisted mostly on working on, working on something. Indeed, Oliver called it "close to meaningless."

"In fact, what America got out of this deal appears to be something of a Trump specialty," Oliver continued. "Something I'm going to call the 'ice cream blow job,' where he announces something that sounds great, but when you really think about it, isn't actually anything."