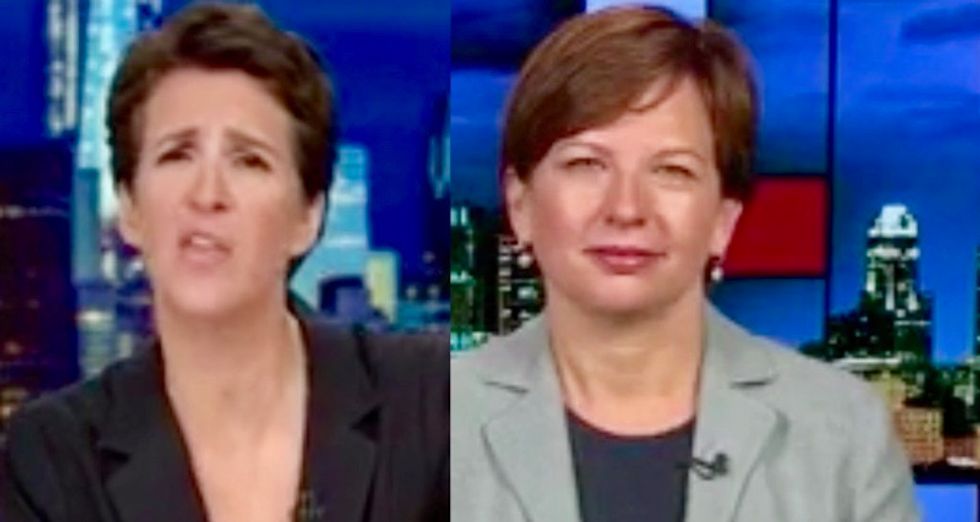 On Thursday, the attorney general for New York state filed a lawsuit calling the Trump Foundation out for "persistently illegal" actions benefitting both the president and his campaign.

The lawsuit is a civil case, not a criminal case, but that doesn't mean that this investigation hasn't exposed Donald Trump and his associates to a criminal case—it's just not up to them to file it.

To explain, on Friday Rachel Maddow had Jenny Johnson Ware on her show.

The Chicago criminal tax attorney told the New York Times that "people have gone to prison for stuff like this" and on Friday she explained how.

"The New York AG would have difficulty bringing a criminal case here but this is up the alley of what IRS criminal investigations would likely be interested in looking at," she said. "These are very potentially far-reaching allegations that go beyond just the president. It touches his campaign staff, his children, his business associates, his campaign donors."

She said that what was exposed is "a hornet's nest that could impact a lot of people."

The IRS doesn't have to do anything—but Johnson Ware thinks they will.

"I think the IRS would be inclined to look at the way this impacts a number of people and not just the president," she said. "Earned income is taxable. So if you've earned money by doing something for someone, it's taxable to you. When I look at the Trump Foundation's [990 forms] it looks to me like business associates of the president were paying money into his foundation, perhaps in place of money that they owed some of his business entities... That means those people were getting a deduction for a 501(c)(3) charitable organization get a deduction for making a charitable contribution that isn't real and the entity that should have been picking up that income isn't picking up the income and paying tax on it."

Watch the full explanation and analysis below.