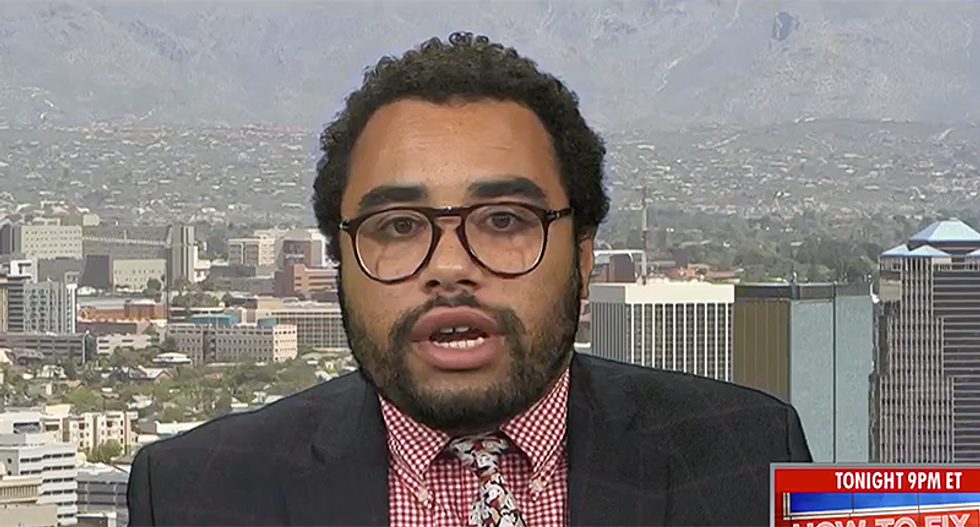 For those workers caring for the children ripped out of the arms of their parents trying to cross the border, they only had one week of training.

In an interview with MSNBC's Yasmin Vossoughian, former migrant shelter center staffer Antar Davidson revealed that he and his fellow staffers didn't receive any training in child welfare, childcare or any medical training, except basic CPR.

"We got about a week's worth of training, which included CPR," he continued. "It should be added that most of the people were at least, as the youth care workers most of them prior to this were in construction or in the restaurant business or retail. So, they really had a difficult time hiring people with the necessary skills."

Davidson also explained that the facility that he was in was a detention center where the children were as young as four and five years old. While he lasted several weeks on the job, he said many couldn't even make it through the on-the-job training portion.

"Could it have something to do with the fact that workers were very much underpaid? This is a federal level of responsibility we're talking about, and the workers undertaking this increasingly difficult task are not given federal level benefits and support," he also said. "So, the people are just being tossed out there unprepared."

He reiterated the job that was too difficult on his own moral code to stay at the facility any longer.

"I had already been asked once to do something against my morals," he confessed in the interview. "I saw that I wouldn't be able to continue there, because increasingly I was going expected to do things that I felt were morally wrong in terms of dealing with the kids who are traumatized.

White women and fascism: Why the far right's 'mama bears' are fighting for white supremacy

White women have played a central role in America's neofascist movement and its assault on multiracial pluralist democracy.

Either as figureheads or actual leaders, white women have stood at the forefront of the Republican Party's attempt to use the bogeyman of "critical race theory" to launch a widespread moral panic and restrict the teaching of American history. The ultimate goal is to severely undermine or fully destroy our current system of public education, and replace it with "patriotic" indoctrination meant to reinforce and protect white privilege and other forms of inequality.

Sex has many beneficial physical and psychological effects, including reducing high blood pressure, improving the immune system and aiding better sleep. The physical act of sex and orgasm releases the hormone oxytocin, the so-called love hormone, which is important in building trust and bonding between people. But there’s a dark side: people sometimes die during or shortly after sex. The incidence is, thankfully, extremely low and accounts for 0.6% of all cases of sudden death.

There are many reasons why this happens to people. In most cases, it is caused by the physical strain of the sexual activity, or prescription drugs (drugs to treat erectile dysfunction, for example), or illegal drugs, such as cocaine – or both.