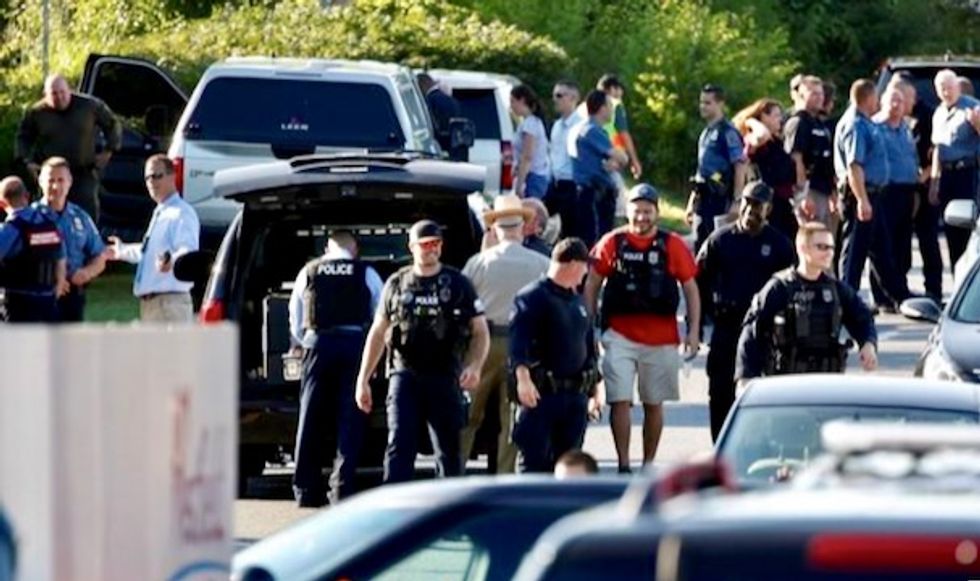 Police walk near a shooting scene after a gunman opened fire at the Capital Gazette newspaper in Annapolis, Maryland, U.S. June 28, 2018. REUTERS/Joshua Roberts

About two hours after the shooting in a Maryland newspaper office that killed five people on Thursday, a small newsroom in Ogden, Utah received a telephone call from a man asking about the ideological bent of the newspaper.

“There was no specific threat made by this person, but he did go off on the liberal media and fake news and suggested that liberals deserve to have violence done against them,” said Kyle Hansen, news editor of the Ogden Standard-Examiner.

The caller hung up when asked to identify himself. The newspaper reported the call to police. The building entrances were checked and the news staff had a meeting about how to handle such calls, Hansen said.

Authorities in Maryland say they do not yet know the motive of the gunman who sprayed the Capital Gazette group newsroom in the Maryland capital of Annapolis with gunfire.

But it has certainly rattled other newsrooms across the United States, which have long cultivated open-door ties with their communities as a business model.

“Obviously it’s always a concern because we write stories that make people angry,” said Staci Matlock, editor of the Taos News weekly newspaper, in Taos, New Mexico. “And given the rhetoric in the last two years about fake news, and about the role of newspapers and other media, it’s not surprising that perhaps people take it to another level.”

Reporters Without Borders press freedom advocacy group called the Maryland shooting “a new tragedy for journalism, which is the victim of increasing violence globally – even in democracies.”

Adam Meyer, associate publisher of the Jackson Hole News & Guide, a small weekly in the resort town of Jackson, Wyoming, said small publications thrive on their close ties with the community.

“Community newspapers have enjoyed a different connection with readers and the public than metro papers. We have kids that play sports together, we see each other after work; we’re neighbors,” he said.

Because of that relationship, it would be challenging to limit access to staff and the general business, Meyer said.

But with the rise of mass shootings in America over the past two decades, some newspapers, including The Arizona Daily Sun in Flagstaff, Arizona, have been conducting drills about dealing with an active shooter.

“This is really nothing new,” said Don Rowley, editor of the Daily Sun, whose six-day-a-week paper circulates to roughly 7,000 people in northern Arizona. “Newspaper people make people mad on a daily basis. It sort of comes with the territory.”

John Robinson, former editor of the News & Record in Greensboro, North Carolina, said increased security is important, “particularly since the president of the United States has declared that the news media is the enemy of the people.

“Given what we know about some of the crazies out there, they may see that as justification to go shoot up the place,” Robinson said.

As a candidate in 2016 and after his election, U.S. President Donald Trump has repeatedly criticized the press, referring to several major news organizations as “fake news” and calling a group that included the New York Times, CNN and CBS “the enemy of the American people.”

Cash strapped newspapers have had to choose between hiring a security guard or a reporter, said Robinson, now a lecturer in journalism at the university of North Carolina. “After today, I think most reporters would say hire another security guard.”