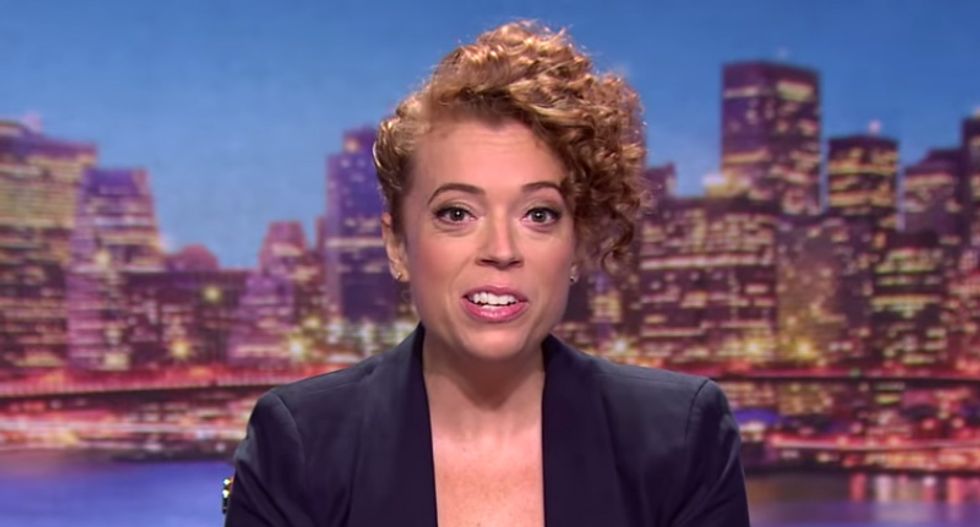 No one rips into reporters like Michelle Wolf. In a nod to her controversial White House Correspondents Dinner monologue where she pulled no punches on the state of journalism, the comedian returned to the topic Sunday during her Netflix show "The Break."

"TV news used to be so lame," Wolf said. "It used to just be Walter Cronkite saying boring things like 'the president has been shot.' But thankfully, that's not news anymore! News got a sexy glow-up. Now it has all the drama and substance and botox of a Real Housewives wine fight. Let's dive in a segment we call, 'Entertainment Explosion!'"

"Kellyanne Conway was recently on 'Meet the Press' for the ninth time to discuss the family separation policy," the host continued. "Now, she's never once answered a question honestly or given any sort of useful information, but I mean there has to be some reason she's on, right? Maybe this time, Chuck Todd will press her until she gives a straight answer."

"The Break" showed a clip from this interview where Conway spewed a nonsensical answer that people are lying about immigrant children not getting care and how making a comparison between the child immigrant detention centers and concentration camps is a disrespect to Holocaust victims and survivors, after which Todd quickly changed the subject to tariffs.

"He changed the subject to trade tariffs?" Wolf said. "Wow, he really held her feet to the fire long enough to warm them up for a massage."

Next, the Netflix host turned to CNN's Don Lemon and a heated interview with former Donald Trump campaign adviser Steve Cortes. The clip shows Lemon ripping in to Cortes, saying he's lying on his show.

"Oh man, as a fan, I just love this kind of TV magic," Wolf responded, "watching the host act like the guest forced his way into the studio is so compelling, you almost forget that he was invited on and paid."

She continued, "Good job, Don! You knew full well that Steve was going to lie and you gave a fun clip to share and that's exactly why you invite him back all the time." A graphic with nearly a half dozen different appearances of Cortes on Lemon's show filled the screen and a voice recording declared: "complicit."

Wolf's message was clear: It's not progressive to take down hateful and harmful people, including Trump employees or white supremacists, when what they ultimately want is a platform — and as Wolf shows, too many cable news networks will gladly comply.

Wolf showed another CNN clip featuring Jake Tapper attempting to silence senior policy adviser Stephen Miller. "You brought him on your show and bravely cut his mic after 12 minutes," Wolf said sarcastically. The voice recording for this clip was "ratings grab."

In her final example of how far gone TV journalism has gotten, Wolf showed a recent clip of ABC "This Week" bringing on Steve Bannon.

"Steve Bannon? The guy who was kicked out of the White House, Breitbart and several Curves gyms?" Wolf quipped. And naturally, Bannon said nothing of substance, including the many-times-refuted claim that the president has never lied.

Wolf proposed an alternative that would strip TV news of most of its sensationalism. "Imagine if these shows just reported the news," she said. "They wouldn't need any of these guests at all. All they would have to say is: 'immigrant children have been ripped from their parents due to Trump's policies. End of news.'"

"But that's so boring!" Wolf added. "Sure ,you guys aren't nearly as bad as the racist, catheter-peddlers over at Fox News, but you're still an accomplice if you're giving a megaphone to a liar. But hey, as long as you keep doing it, we'll keep watching it."