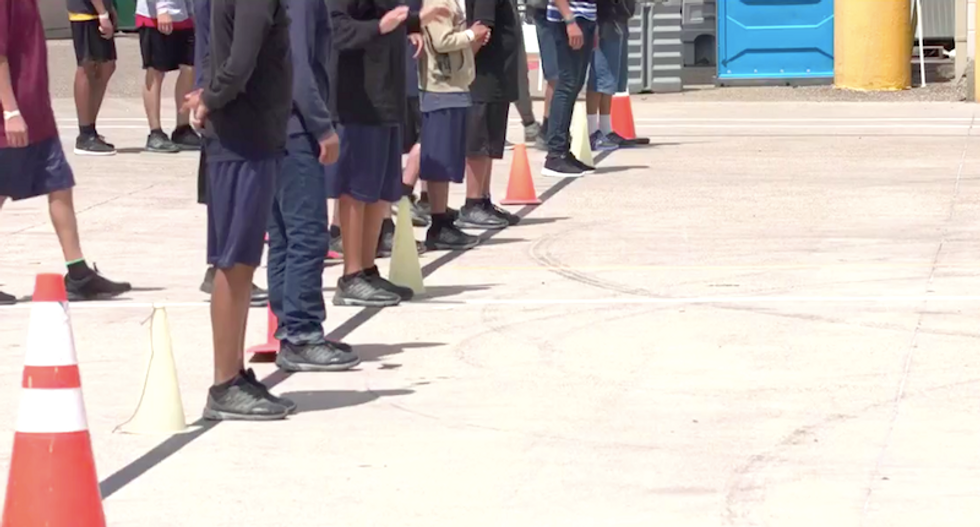 MSNBC correspondent Jacob Soboroff toured a shelter for detained child migrants in Brownsville, Texas -- and he shared disturbing video from his visit.

Reporter Jacob Soboroff appeared Thursday on "Morning Joe" to discuss his findings from Casa Padre, a licensed child care facility where nearly 1,500 boys ages 10 to 17 are being held inside a former Walmart store.

"It was shocking, is the best way to describe it," he said.

Detainees and visitors are greeted at the facility by a mural of President Donald Trump that features a quote from The Art of the Deal: "Sometimes by losing a battle you find a new way to win the war."

Soboroff was one of the first journalists to visit the shelter, which is operated by the nonprofit SouthwestKey organization, since the "zero tolerance" separation policy was announced by Attorney General Jeff Sessions.

"It's only getting worse there," Soboroff said. "That's because the Trump administration obviously has announced a zero tolerance policy you were talking about for separating children from their families when they cross the border illegally. Our colleague Julia Ainsley put it this way, this is a self-inflicted crisis. It does not have to be overcrowded in facilities like this, but it is because the attorney general and the president of the United States decided to prosecute, 100 percent in their ideal circumstance, immigrants that cross the border illegally."

Soboroff said shelter employees asked the news team to smile at the hundreds of migrants in line for a meal, which they eat in rotating shifts, because “they feel like animals in a cage being looked at.”

"They let us in here, this is run by the Department of Health and Human Services, contracted out to nonprofit," Soboroff said. "The quality and care the kids get inside here is not bad. It is clean inside, they are not in cages or jails, although, an employee said to us they feel like animals in cages."

He said the boys spend two hours a day outside, with one hour of structured time and one hour of free time, and they have less than 40 square feet of living space per child -- and he warned the situation was likely to get worse, and soon.

"There's no other scenario, other than being incarcerated in prison, to describe what it is like," Soboroff said. "They wanted to let us in to know this is as good as it gets if the tent cities that everybody is talking about and kids start to be moved there. The leader of this center told me on federal property, they don't have to be licensed child care protectors. It is an emergency situation and all quality of care is called into question."

Soboroff said the visit left him with some disturbing questions.

Starting to get some handout photos from our tour with @HHSGov. Here’s the Trump mural I mentioned to… https://t.co/FdGl3TC6Dr
— Jacob Soboroff (@Jacob Soboroff) 1528939555.0