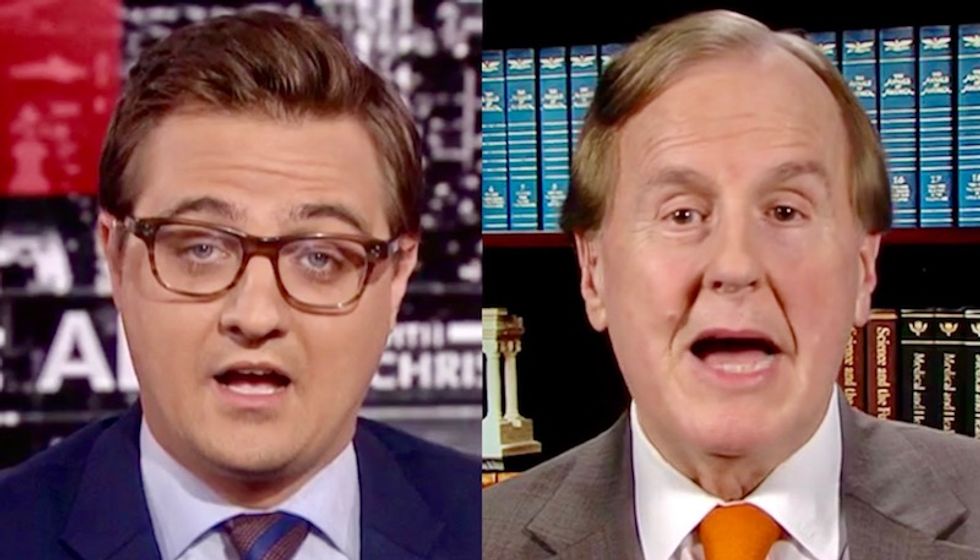 A Republican went down in flames when asked to defend Donald Trump's immigration policies to MSNBC's Chris Hayes on Friday night.

Pittenger remained unwavering in his repetition of Trump's lines, even as Hayes busted him again and again.

"President Clinton, Mrs. Clinton, President Obama talked about the issues related to illegal immigrants coming into this country, that they have got to address it. Nobody had the courage to do anything about it," Pittenger claimed.

That's simply not true, Hayes said. Conservative extremists in the House have simply tanked all proposals.

"Congressman, am I correct that in 2013 there was a bipartisan piece of legislation that passed the Senate by a margin of 68-32 that the president endorsed?" he asked. "Am I correct that the Republican Speaker of the House did not allow that to come to a floor vote despite the fact it had majority votes?"

Pittenger attempted to deflect by blaming migrants for the heroin epidemic which was created by American pharmaceutical companies.

"15,000 people died in 2016 because of heroin overdose. Those are real people," Pittenger said. "I had a little girl down the street from our house of the she got caught up in all of this. She was a sweet girl, played the violin in concerts.... We have open borders and what's happened to real families."

Pittenger repeatedly claimed that the United States has "open borders."

"Have you ever tried to cross the border, sir?" Hayes asked.

Hayes then pointed out that border crossings are down this year, as they have been for the last several years, which Pittenger tried to credit to Trump.

"They're down because they see a president that means business," he said.

The congressman then tried to tell another personal anecdote.

"Years ago, my daughter was hit by a drunk driver. A Latino that came across from Mexico. Came sailing through a red light and hit my daughter," Pittenger said. "If I hadn't been in a position to buy her a very safe, good car, my daughter would have been seriously hurt or worse, okay? This was an illegal immigrant who was totally inebriated who had come across our border."

Hayes repeated the fact that House Republicans could have passed an immigration bill had the party's extremists not stopped it.

"Congressman, thank you for that. The history and the fact of the matter is George W. Bush and Barack Obama tried to sign comprehensive immigration reform," he said.