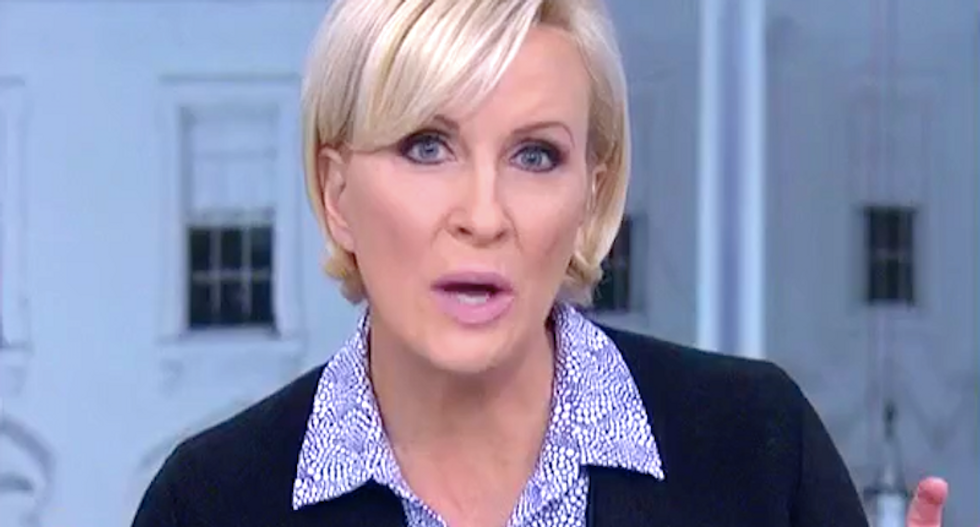 MSNBC's Mika Brzezinski broke down the fourth wall to deliver the truth about President Donald Trump -- and co-host Joe Scarborough cringed in embarrassment and mocked her afterward.

The "Morning Joe" co-hosts reported Trump's claim that the parents of Korean War veterans had begged him to engineer the return of their slain sons' remains, which would be nearly impossible given the average age of those veterans is currently 87 years old.

"I can't -- it's hard to read this stuff with a straight face," Brzezinski said, calling to mind the time she famously ripped up a script reporting news about reality TV star Paris Hilton.

"It's clear the president is stunningly ignorant -- probably the most ignorant president we will ever have," she continued, referring to another former reality TV star.

Scarborough begged his fiancée to stop, and covered his face as she continued lambasting the president.

Brzezinski told him to stop making excuses for Trump.

"I think everybody gives him way too much credit, the guy is ignorant and warped," Brezinski said. "Uh-huh, we just need to stop asking questions about what the strategy is and what could he really be doing?"

"He's ignorant, he's warped, he's obsessed with money and sex and he finds his power through those two things, and that is the strategy of this president," she continued. "It's base and caveman-like, and I'm not going to pretend to dance around questions to be objective when clearly the only people who have loyalty oaths to him are lose their jobs if they don't follow him blindly. But there's right and there's wrong, and everyone knows the difference. Let's stop playing games -- there's no question here."

Scarborough uncovered his face and mocked Brzezinski as a self-parody.

"A weird thing just happened, I had the feed from our show and suddenly Kate McKinnon from 'SNL' came up," he said, referring to the comedian who plays Brzezinski on "Saturday Night Live." "How did Alex do that? Get her in a split box, the whole thing. It's not that Donald Trump is ignorant, it's not that Donald Trump is anything else -- he's lying."

"No, Bill Clinton lied, Donald Trump is ignorant," she said.

"There is a third theory," Sachs said. "There's a third theory, and that is that he's delusional. He's living in his own world, and I think that that is -- that has to be put up there as another explanation."