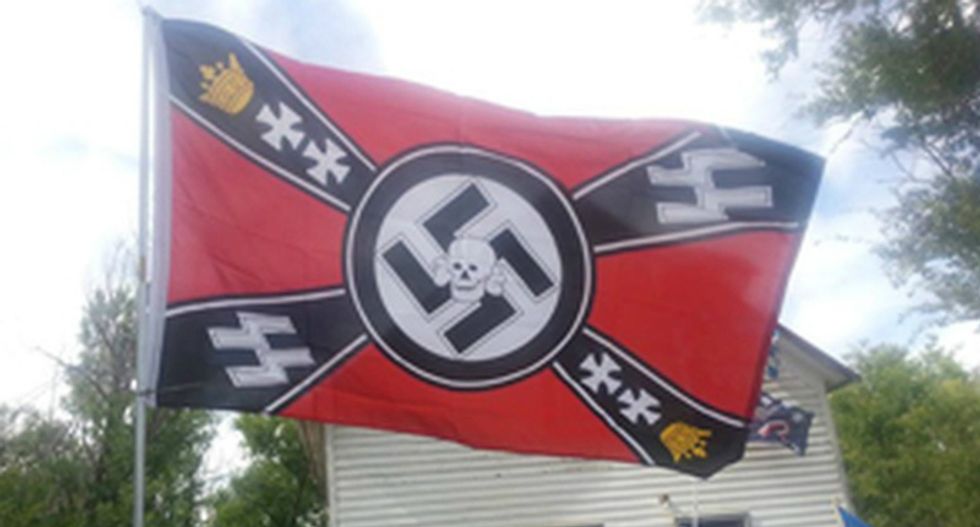 A flag bearing a swastika that flew outside the former home of ND white supremacist Craig Cobb. Image via screengrab.

A tiny town in North Dakota that nearly was taken over by white supremacists in 2013 is mulling a vote to dissolve rather than allow a different pair of suspected bigots gain control in their latest bid for power.

The Bismarck Tribune reported that Ryan Schock, mayor of the roughly 20-person town of Leith, went door-to-door in the village and collected 12 signatures from residents who would be willing to put to a vote whether they should give up their incorporated status and turn their affairs over to Grant County.

Schock told the Tribune that he took the drastic measure because he's concerned Michael Bencz and Deby Nelson, a couple that were elected to the village's council via write-in votes, may "reopen old wounds" from when notorious white supremacist Craig Cobb attempted to take the town nearly five years ago.

"Bencz has denied any association with Cobb’s ideas," the report noted. "However, but he did buy a Leith property from Cobb and showed up from Wisconsin just as Cobb started a national call out for like-minded racists to help take over the town and fly flags bearing the Nazi swastika."

In late 2013, Cobb walked the length of the town twice over with fellow white supremacist Kynan Dutton as they campaigned to turn Leith into a "whites-only" village. The man who flew a swastika flag outside his home was arrested the same day.

The white supremacist was sentenced to prison after terrorizing his neighbors, but his probation — and his court order to stay away from Leith — ended in April. In the aftermath of the deadly "Unite the Right" rally in Charlottesville, Virginia last year, Leith residents relived their traumatic experience.

"It's what we lived with," Lee Cook, who sat on the Leith council at the time, told the Tribune after a suspected white supremacist hit 31-year-old Heather Heyer with his car at the 2017 rally, resulting in her death. "My first thought was of all those people who thought we were crazy for making such a big deal of it. We heard comments of just let him be; that's what happens when you just let them be."

The people of Leith will decide whether or not to dissolve on July 23.