'It's not a f*cking law!': John Oliver rains hellfire down on justification for tearing families apart in Jeff Sessions takedown 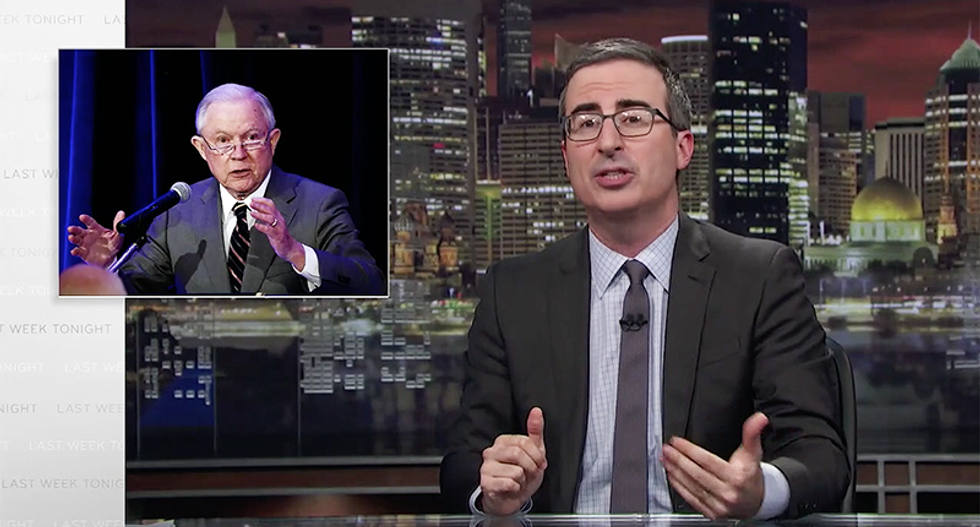 During his Sunday evening episode of "Last Week Tonight," Oliver called out Attorney General Jeff Sessions for the policy he knew would mean children would be separated from their parents, who would be incarcerated.

"And that is objectively awful. And yet, Trump argued that Sessions had no choice," Oliver said before playing a clip of Trump saying Sessions is following laws that are already on the books.

"I want the laws to be beautiful, humane and strong," Trump told the press.

He went on to fact-check the president's claim that Democrats handed the administration those laws.

"Because, and I cannot stress this enough, there is no law that suddenly required separating parents from their children," Oliver continued. "This was the result of a deliberate policy choice by Jeff Sessions. A man so small he can wear, and this is true, a raspberry as a hat. That's a fact."

It's also weird to Oliver that Trump is trying to distance himself from his own administration's policy while Sessions doubled down and said that the decision came "from the very top," and quoted the Bible.

Oliver noted that quoting the Bible to justify a hateful policy is just as arbitrary as basing policy off of Green Eggs and Ham, claiming, "We must keep children in a box. We keep them with a fox."

The choice of the Bible quote, that was frequently used to justify slavery, was another thing that took Oliver back.

"And I know that you're thinking, 'Wait, wait wait. He wouldn't align himself with slave owners, even accidentally,'" Oliver continued. "'Not Jefferson Beauregard Sessions of Alabama!' Well, I'm sorry, but he did."

When it came to Sarah Huckabee Sanders backing Sessions up saying that people should follow the law, Oliver again exclaimed "not a f*cking law!" He also noted that there are many things said in the Bible, but it is obvious that the world doesn't still follow them.

"At one point the Bible demands that the head of government get 100 foreskins, but I don't think Sanders is looking for Congress to gather together and start slicing d*cks," he closed.