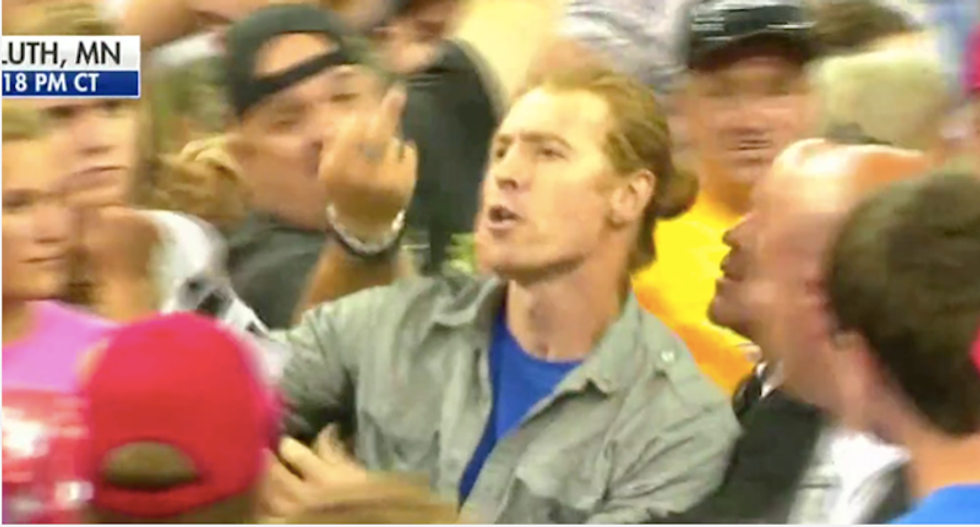 The man-bunned protester singled out by Donald Trump for his hairstyle at a rally in Minnesota on June 20 has spoken out against the president once again for his known ties to billionaire pedophile Jeffrey Epstein.

"Sorry for interrupting your little rally in Duluth," activist and comedian Sam Spadino wrote in an open letter to Trump for the Minneapolis–St. Paul alternative weekly City Pages. "My friend and I just wanted to ask you a question, and figured in person was the best way to do it since you’re a busy guy, and no 'fake news' reporters have brought it up lately."

"My question, in case you missed it on the sign, is 'Who is Jeffrey Epstein?'" he continued. "You answered the question once in the October 28, 2002 issue of NY Magazine, saying: 'I've known Jeff for fifteen years. Terrific guy. He's a lot of fun to be with. It is even said that he likes beautiful women as much as I do, and many of them are on the younger side. No doubt about it: Jeffrey enjoys his social life.'"

"When you said that 'he likes beautiful women as much as I do, and many of them are on the younger side,' did you mean younger than 16?" Spadino continued. "Did you know that at least one of his victims was 14 years old?"

He went on to detail Epstein's insidious resume: a billionaire who, as The Daily Beast pointed out after the Duluth, MN rally, has been accused of "a pedophile ring of dozens of underage girls, whom he groomed and then loaned out to powerful friends." He was charged in Florida and spent 13 months in prison there for "Procuring Any Person Under Age Of 16 For Prostitution," and is considered a Level Three sex offender in the state due to his likelihood for re-offending.

Though Epstein has also been connected to other famous men (and alleged abusers and assaulters) including Kevin Spacey, Woody Allen and Bill Clinton, Spadino noted that "none of them were named in a lawsuit together, like [Trump was], in Jane Doe v. Donald J. Trump and Jeffrey E. Epstein, filed in New York in June 2016."

"That lawsuit goes into great detail about what you and your buddy were allegedly up to with two female children 'on the younger side,'" he wrote of the suit detailing the two powerful mens' alleged assault of a girl who was 13 years old at the time.

"Every time Jeffrey comes up I have more questions, but the only response you gave me was in the form an insult," Spadino wrote. “I know seeing a picture of yourself next to a convicted pedophile is probably not a great look for someone who has recently been putting immigrant kids in cages, but I expected a better comeback from you than a 'cut your hair, hippie' knockoff. Weak."

"I am glad you mentioned my “man-bun” however," he wrote, because "this story would have gotten no press if you had just held your tongue."

You can watch video of Trump asking if Spadino is "a man or a woman" below: