Racist woman goes bonkers in Florida nail salon: ‘Sounds like you were born out of a f*cking hermit crab’ 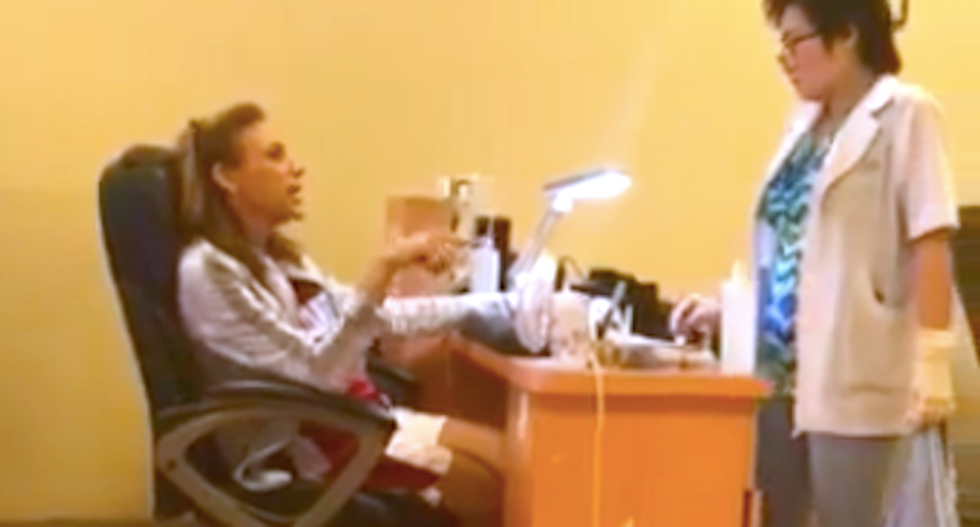 A Florida woman went on a racist rant at a nail salon after complaining about pricing.

Video of the incident was posted on Facebook, where it was shared thousands of times, reported WFTS-TV.

"If I want to go to a nail salon, I want them to talk English so they can understand when I want a godd*mn top coat," the woman says.

Karen Vu, owner of Bali Nail Spa in Lutz, can be heard on the video trying to calm the woman, who she said was a regular customer who sometimes acts unpredictably.

"If they don’t understand the language they should go back to their own country, period," the woman says.

She complains about the cost of the salon's services and brags that her boyfriend works for a TV news station, implying that he would help expose what she sees as unfair business practices.

Instead, the video exposed her racist behavior toward the nail technician.

"You sound nasty, your language sounds nasty," the woman says. "It actually sounds like you were born out of a f*cking hermit crab."

The other customer recording video calls out the woman for her rude behavior.

"You're being nasty," she continued. "You asked my opinion a minute ago and I’m f*cking telling it to you -- you don’t call them hermit crabs."

Vu said she felt sorry for the woman who ranted at the salon.

"I don’t mind what she said because she doesn’t have control over her mind," Vu said.

One woman who viewed the video on social media drove 30 minutes to give the nail technician a tip she didn't receive from the racist woman.

"I just wanted to come over here tell them they don’t deserve to be treated the way that they were from that lady, or for anyone else for that matter," said Jennifer Verge. "God just spoke to me and told me to bring him what he didn't get from the lady because he got gypped when he's supposed to be paid for the work that he did and that's unacceptable."