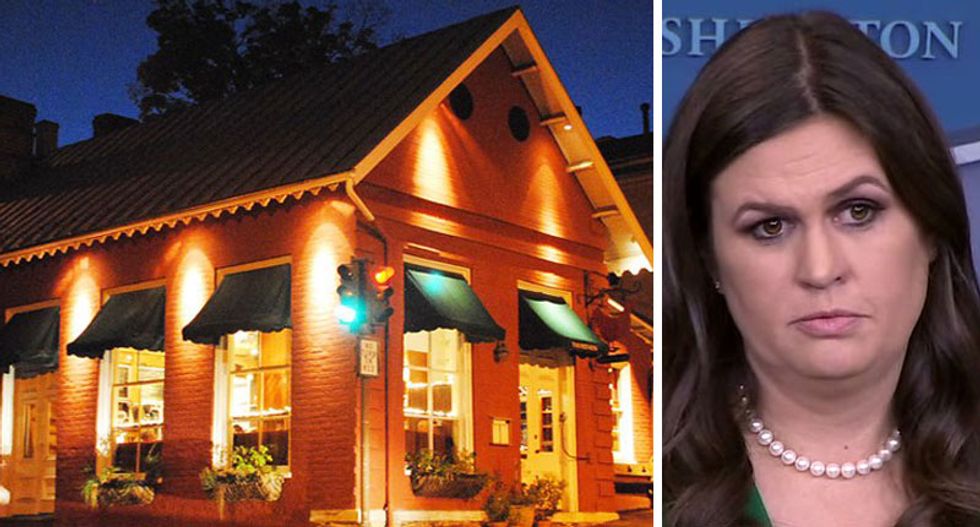 The owner of the Red Hen restaurant in Lexington, Virginia explained why she ejected White House press secretary Sarah Huckabee Sanders from the establishment on Friday evening.

Speaking with The Washington Post, owner Stephanie Wilkinson acknowledged that she may have threatened the economic health of her small business with her principled stand, but said she would do it again.

“I’m not a huge fan of confrontation,” Wilkinson said. “I have a business, and I want the business to thrive. This feels like the moment in our democracy when people have to make uncomfortable actions and decisions to uphold their morals.”

Wilkinson recounted how she was at home when she got a call informing her that Sanders was dining at the Red Hen, under a reservation made in her husband's name. She raced to the business to investigate.

Wilkinson explained that she queried her employees about what to do, knowing several employees were gay and all the staff had all watched the press secretary evade questions while defending Trump's border separation policy.

“Tell me what you want me to do. I can ask her to leave,” she told her employees. “They said yes.”

The owner politely asked Sanders to step out on the patio "for a word."

“I was babbling a little, but I got my point across in a polite and direct fashion,” Wilkinson said. “I explained that the restaurant has certain standards that I feel it has to uphold, such as honesty, and compassion, and cooperation."

After explaining her reasoning, she said, "I'd like to ask you to leave."

Sanders stepped back inside to collect her belongings, then left the establishment, later complaining about her ejection on Twitter.

“We just felt there are moments in time when people need to live their convictions," the owner explained. "This appeared to be one.”

Despite the backlash from Trump supporters, Wilkinson seems unworried.

“Whatever happens, we will soldier on,” Wilkinson said. “Absolutely, yes, I would have done the same thing again."