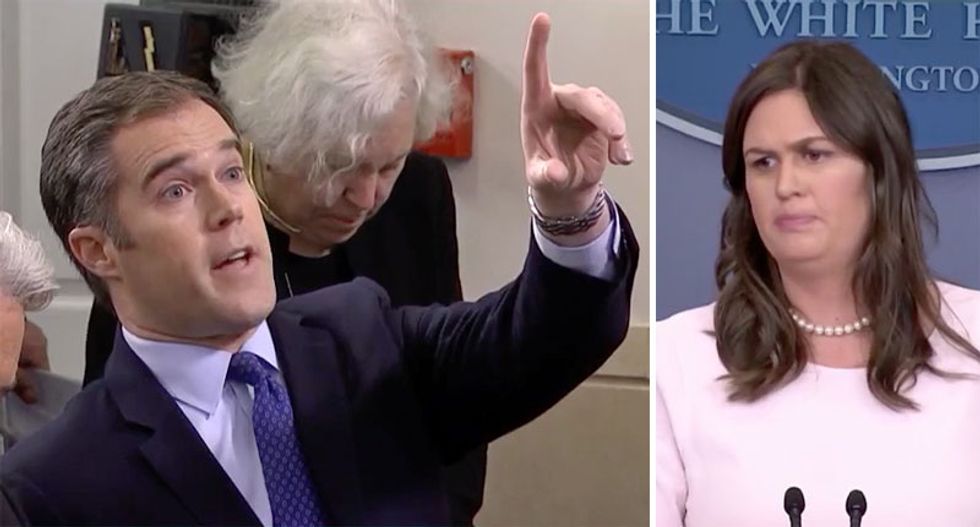 Peter Alexander, national correspondent for NBC News, had a contentious back and forth with White House press secretary Sarah Huckabee Sanders during Monday's press briefing.

"Peter, by the way, you were one of the reporters trying to get an answer out of Sarah Huckabee Sanders that she wasn't very forthcoming about," Velshi noted.

The host played a clip of Alexander's question.

"Does the president believe that he is above the law?" Alexander asked the press secretary.

"Certainly not, the president hasn't done anything wrong," Sanders replied.

"Certainly the constitution clearly lays out law and once again the president hasn't done anything wrong and we feel very comfortable on that front," she replied.

"Just a moment ago, you said it's not that clear. I guess, simply put, does the president believe he is above the law?" he followed-up.

"Certainly no one is above the law," Sanders replied.

Reflecting on the briefing with Velshi, Alexander described it as "an example of a little bit of the jostling that goes on in the briefing room when we want to get our questions asked."

For Alexander, the main take-away from the briefing was a question of Sanders' strained credibility.

"The bottom line is, why should you believe anything that comes from Sarah Huckabee Sanders when she is speaking from behind the podium?" he wondered.

'Going to get someone killed': Trump lawyer threatens to expose FBI agents even if DOJ redacts names

Trump attorney Alina Habba on Thursday suggested releasing surveillance footage of the FBI's search of Mar-a-Lago even though it could reveal the identities of agents who executed it.

Federal Magistrate Judge Bruce Reinhart, who signed off on the search warrant, on Thursday gave the Justice Department a week to propose redactions ahead of a possible release of the probable cause affidavit filed by the DOJ to get the warrant. The DOJ opposed releasing the affidavit at all, arguing that it could expose agents and witnesses and reveal the inner workings of an ongoing investigation. The DOJ is investigating Trump under the Espionage Act after he failed to turn over classified documents he had taken to his residence.