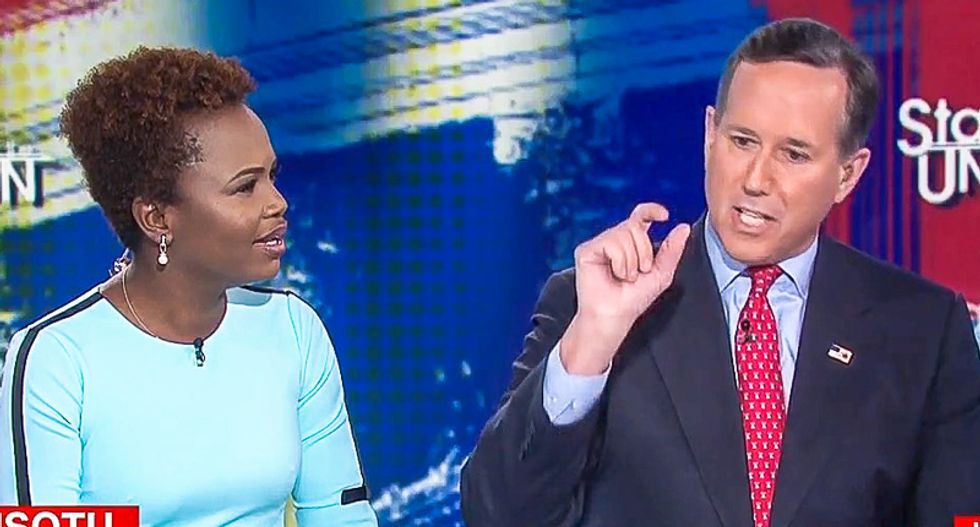 During a CNN panel discussion on Sunday, Linda Chavez, a former aide to President Ronald Reagan, complained about an alleged double standard for conservative comedians like Roseanne Barr, who recently had her show cancelled after she used racist language on Twitter.

According to Chavez, TBS host Samantha Bee was speaking for "liberals and their values" when she used a vulgar sexist term to describe Ivanka Trump.

"Racism was here before Donald Trump and sadly it will be here after," she remarked. "But what he has done, he has normalized it. He's given license to people to make it okay, to say, 'You want to put out your racism, make it loud and be public about it? Go ahead because he's doing it.' And that is the problem that we're in."

"The reality is that this president uses crude words and acts crudely sometimes," Santorum opined. "And I think most Americans, even Republicans, have problems with that. And we see Democrats who do the same thing."

The former Republican senator added that "most Americans" want the president to "be real and be out there."

Jean-Pierre observed that Trump "tapped in" to racism in America to help win the presidency.

"He started his political career talking about birtherism," she reminded Santorum. "And let's not forget how he capped off his first year. He saw Neo-Nazis marching in [Charlottesville] and what did he say? There are fine people on both sides."

"What's being ignored here is the role that Barack Obama played in all this," Santorum replied. "I mean, you can't just go from, 'We elected our first black president and all the sudden we get Donald Trump.' There was something in between."

"I'm saying that it tapped in to something in this country," Jean-Pierre insisted.

"The thing that it tapped into was that many, many, many people saw Barack Obama doing more to exacerbate racism in this country," Santorum opined.

"Every time there was a controversy when someone of color was involved, he took the side -- many times against the police," Santorum remarked. "He did it over and over and over again."