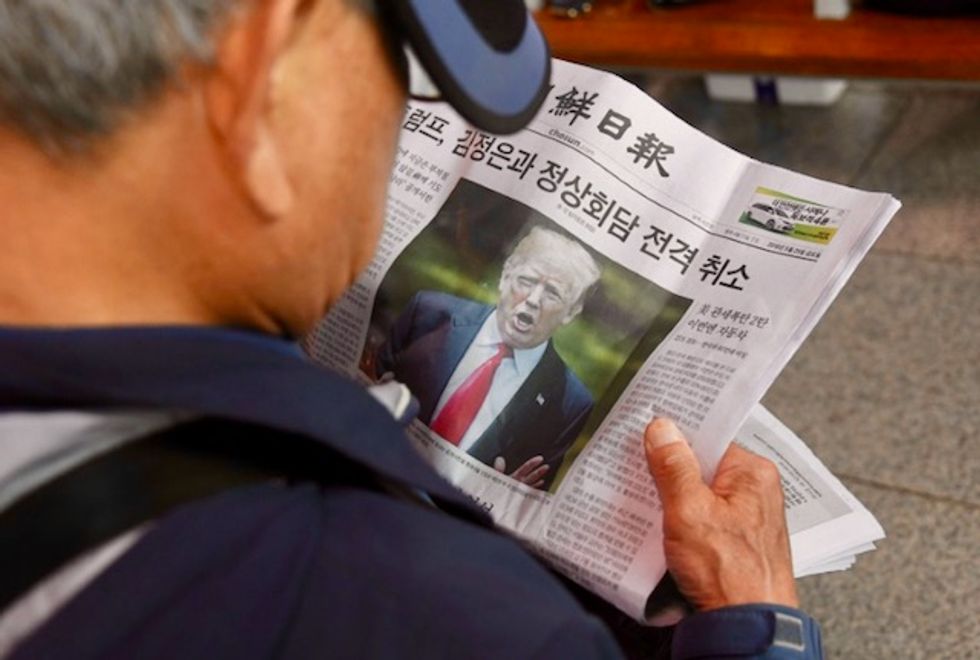 Most South Korean newspapers reacted with cautious optimism Wednesday to the historic meeting between Donald Trump and Kim Jong Un in Singapore, although one conservative daily denounced the agreement it produced as "absurd".

The centrist Hankook daily noted that the post-summit joint statement signed by the US president and North Korean leader on Tuesday had omitted Washington's demand for a "complete, verifiable, irreversible" denuclearisation of the North and lacked a concrete timetable to achieve that goal.

Instead the statement commits Pyongyang to "work toward complete denuclearisation of the Korean Peninsula".

"In terms of the key issue... it may appear that the result failed to meet expectations," Hankook said in an editorial.

But it added that the concrete steps of dismantling the North's nuclear arsenal would be handled during follow-on negotiations, and that negotiations for a nuclear-free Korean peninsula and permanent peace between Seoul and Pyongyang had "just begun".

The pro-business Joongang daily was cautiously optimistic, even though the timetable for the dismantling of Pyongyang's nuclear weapons remained vague.

"We can't dismiss the summit as a failure. It is already a historic event that the leaders of two foes have met. The first step to end decades of hostilities since the Korean War has been made", Joongang said.

However, the conservative Chosun daily lambasted the agreement signed by Trump and Kim.

"The June 12 agreement is so outrageous and absurd that we could hardly believe our eyes," it said in an editorial.

The paper attacked Trump for promising to stop annual US-South Korea joint military drills before the North had started dismantling its nuclear arsenal.

Its view was echoed by the conservative opposition Liberty Korea Party, whose leader Hong Joon-Pyo castigated the summit as a "great failure".

But an editorial in the left-leaning Hankyoreh praised the summit as opening a new chapter for a "great change" in US-North Korea ties.

The stoppage of the US-South Korea drills, which the North says are rehearsals for aggression against it, will serve as "a catalyst" in improving ties between the two Cold War foes and denuclearisation of the North, it said.