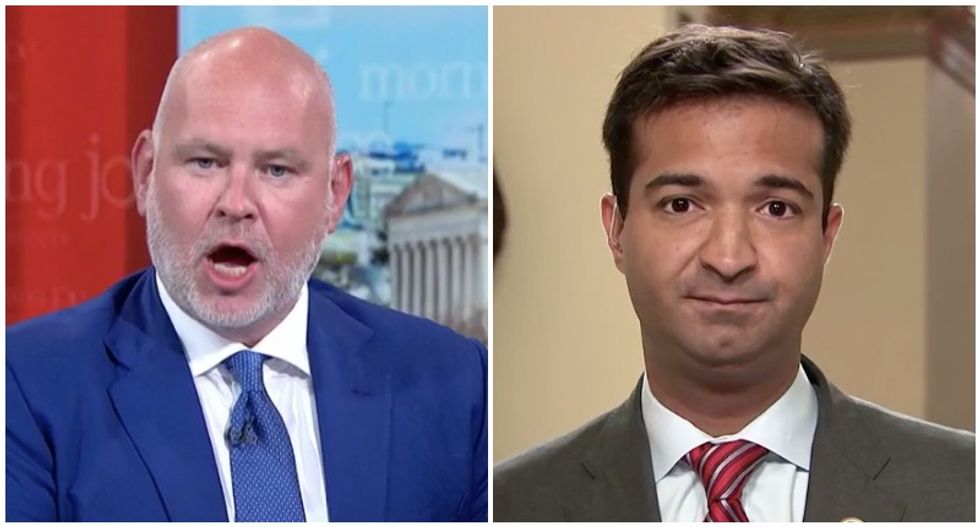 A Florida Republican defended President Donald Trump's child detention centers -- and he got raked over the coals by panelists on MSNBC's "Morning Joe."

Rep. Carlos Curbelo (R-FL) admitted the family separation policy was immoral and cruel, but he claimed the children were in some ways better off at detention centers than with their parents.

"We should be very grateful to Catholic Charities of Miami," Curbelo said. "The images that we've seen have been very difficult, very painful. The images, what I witnessed yesterday at this shelter, was truly uplifting. The children all had toys, a group of small children was on their way to the seaquarium."

The lawmaker said he saw 70 children, including 22 separated from their families at the border and 50 older children who had been traveling alone.

"We were able to interact with them, and I looked at that, and I said this is who we are as a nation. coincidentally," Curbelo said. "That's the same shelter that some 60 years ago welcomed Cuban exile children who were only expecting to be there for a few months and ended up staying in the country forever, for the most part."

Curbelo told the MSNBC co-hosts the youngest girl he met with was 5 years old, but he assured them the children were better off in government custody.

"You could tell they had gone through a difficult experience, but you could also tell that they were being treated with extraordinary kindness," Curbelo said, "that they were seeing things that they had probably never seen in their lives, they were living in air conditioning. I'm sure most of those children had never experienced that and they were getting to see my town, the city of Miami. So we know that these children will soon be reunited with their families."

Host Joe Scarborough asked how he could be sure those families would be reunited, and co-host Mika Brzezinski said the children wanted their parents or relatives -- not air conditioning and sightseeing trips.

"I strongly oppose that policy," Curbelo insisted, "and what I can tell you is that some of the staff from the archdiocese of Miami told us the children who were there were on their way to being reunited with their families, so we know that process has started."

Scarborough said that would be news to him, and he again pressed the congressman for details.

Curbelo claimed some of those parents had been returned to DHS, and he then offered justification for a policy he agrees is cruel.

"We must find the balance between enforcing our country's immigration laws because we cannot be a lawless country, that is true, but we also cannot traumatize children in this way and we have to keep families together as much as possible," Curbelo said.

Steve Schmidt, the former GOP strategist, chimed in with a simple question.

"I believe so, and I've spoken out against it since Day One," Curbelo said.

Schmidt then asked whether Vice President Mike Pence was a hypocrite for espousing Christian values while standing by as immigrant children were subjected to state-sanctioned cruelty.

"Well, you can think whatever you want about whoever you want," Curbelo said. "I can speak for myself, and I can tell you that I found that policy to be completely objectionable, wrong, immoral, unnecessary -- and look at what happened. The American people spoke out, members of Congress from both parties spoke out and the administration backed off. This is the way it's supposed to work."

Schmidt wasn't convinced, and he said Trump had ceded the moral high ground to autocratic regimes.

"The extraordinary and astounding hypocrisy of it to see the constancy of the assertion of Christian virtue by political leaders in this country who have established internment camps for babies and toddlers," Schmidt said. "I never in a million years thought I would sit here or anywhere and say this. But the difference now between Venezuela and Cuba and the United States is this: Venezuela and Cuba are the countries without internment camps for babies and toddlers."