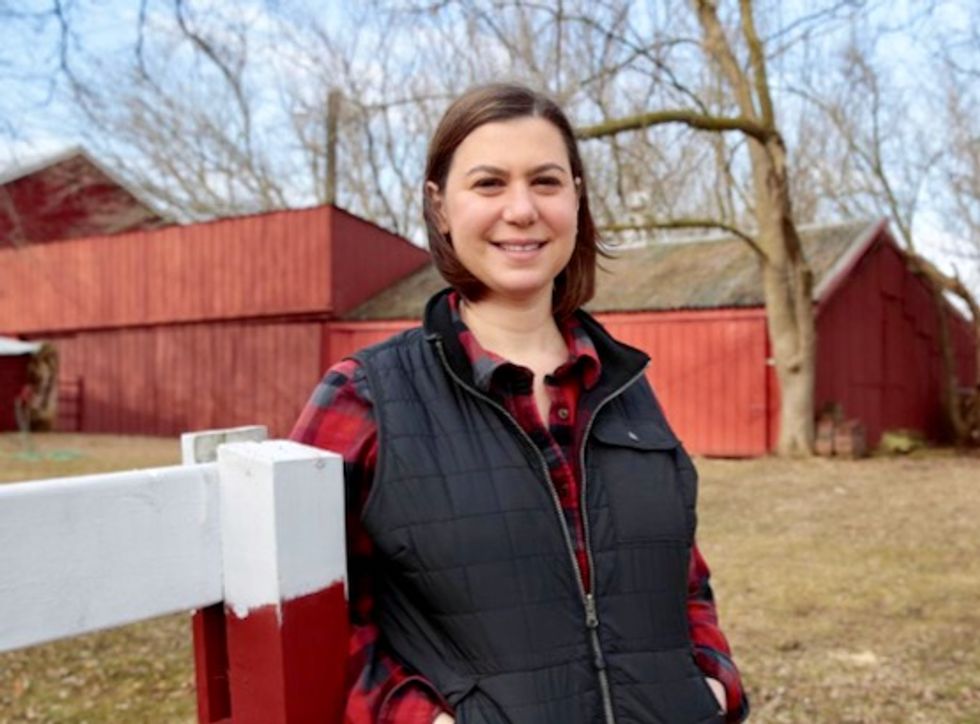 Sipping California zinfandel, munching deviled eggs and fretting about President Donald Trump, the guests attending a political fundraiser at a Silicon Valley executive’s home were the usual assortment of tech entrepreneurs and investors.

But the congressional candidate they had come to meet that March evening in the hills north of San Francisco was anything but typical.

Elissa Slotkin, a Democrat and former defense official, is running for Congress in Michigan’s 8th District, a pocket of Detroit suburbs, college campuses and farmland more than 2,000 miles (3,200 km) away. She is a gun owner, a supporter of constitutionally enshrined gun rights and a critic of single payer health care - hardly the kind of far-left candidate voters in the San Francisco Bay Area generally embrace.

But Slotkin, 41, and the party guests shared a goal: wresting control of the House of Representatives from Republicans in November’s congressional elections.

With no Bay Area Democrats facing serious challenges from Republicans, the party host, Brian Monahan, and a group of fellow technology and marketing executives have decided to look farther afield for candidates in swing districts that need financial support.

To focus their efforts, Monahan, technology investor Chris Albinson, executive recruiter Jon Love and a handful of others have formed a loose-knit organization they call Purple Project.

So far, the group has raised at least $210,000 for Democratic candidates in Ohio, Michigan, Pennsylvania and elsewhere. The sum is a pittance compared to the money being spent on key races by fundraising Political Action Committees (PACs), which represent corporations and political interest groups and contribute millions of dollars each election cycle. But in moderate districts with close races like Slotkin’s, such grassroots efforts can make a difference.

Purple Project is one of a number of informal groups in solidly blue states such as California, Vermont and Massachusetts that have mobilized this year to back candidates in distant swing districts. So far, it has endorsed six candidates and plans to endorse 14 more by the end of July.

Love, a longtime executive recruiter for technology companies, spearheads candidate vetting. Many in the group have made the maximum allowable individual donation of $2,700 to each candidate.

For its participants, Purple Project is a way to channel months of political frustrations since Trump took office.

“Things are simply unacceptable and sitting on the sidelines just stewing on it isn’t helping anyone,” Monahan said. “You feel like out here in California your vote is worthless.”

That’s because House representatives from the San Francisco Bay Area are unwaveringly Democratic.

The group’s efforts could backfire, however, by opening candidates up to accusations of being beholden to outside interests and disconnected from their constituents, said Kyle Kondik, who studies House races for the University of Virginia’s Center for Politics.

“You might be able to attack Slotkin as not having deep enough roots in the district,” Kondik said.

To re-take the House, Democrats would need to take 23 seats held by Republicans, as well as keep all the districts they now hold. That means races like Slotkin’s, in a competitive district with a mix of Republican and Democratic counties stretching from north of Detroit to the state capitol, Lansing, are pivotal.

She faces a bruising battle, however, trying to unseat two-term Congressman Mike Bishop, who won with 56 percent of the vote in 2016.

Out-of-state money has been the lifeblood of Slotkin's campaign, putting her far ahead of her competitor for the Democratic nomination and nearly neck-and-neck with Bishop. Slotkin had raised $1.5 million as of March 31, with just $304,000 coming from Michigan donors. She raised more than $120,000 from individuals in the San Francisco Bay Area. (Graphic: tmsnrt.rs/2sjPBV1)

“Our campaign finance laws are so broken that in order to compete you have to raise a significant amount of money,” she told Reuters during a tour of her 400-acre farm in Holly, Michigan, when asked about Purple Project’s donations to her campaign. “If that means raising from outside the state I’d rather have that than the influence of a corporate PAC.”

At a house party in April in the small Michigan city of Brighton, about a dozen neighbors from a tidy middle-class neighborhood gathered to meet Slotkin and cheer her on, but not all were hopeful.

“I don’t give her much of a chance, but it’s good to have her there and maybe she’ll take a bite out of Bishop’s vote,” said Blake Lancaster, 74.

Purple Project is a political organization with a deeply personal origin. Albinson, co-founder of San Francisco technology investment firm Founders Circle, said he was unnerved to learn his father-in-law in Michigan, Jerry Smith, voted for Trump.

He set about finding moderate congressional candidates he and his friends in Silicon Valley could support, but who would also appeal to Smith.

After Albinson met Slotkin, he subjected her to a litmus test: she had to visit his father-in-law.

Smith, 72, describes himself as a “common-sense Republican” worried about his healthcare costs. A retired small business owner who lives on a 40-acre farm just outside the 8th District, Smith said he and his wife, Barb, fret about spending down their savings “just for the regular monthly bills.”

Slotkin won over Smith, who said he was impressed by her resume and decency, and her views on improving President Barack Obama’s healthcare overhaul, the Affordable Care Act, to keep healthcare costs down. From there, Purple Project has grown.

To win the group’s backing, candidates must be able to appeal to Trump supporters and must have past service in the military, government or non-profit sector. They also have to reject corporate PAC money and support affordable health care and infrastructure improvement.

The group offers more than money. Monahan, who was head of marketing at Walmart.com and an advertising executive at image-sharing and shopping website Pinterest, helps campaigns with digital marketing, for instance.

Last spring, Slotkin left Washington and a 15-year government career in defense and intelligence work to move back to the family farm in Holly. But some of her neighbors in this working-class town are not particularly interested in a newcomer Democrat.

Holly town supervisor George Kullis said he plans to vote for Bishop because the congressman helped him get federal funding for new signs for the national cemetery in town.

“Bishop has been good; he’s been ‘Johnny on the spot,’” Kullis said. “Besides, who is this Elissa Slotkin? I’ve never heard of her.”