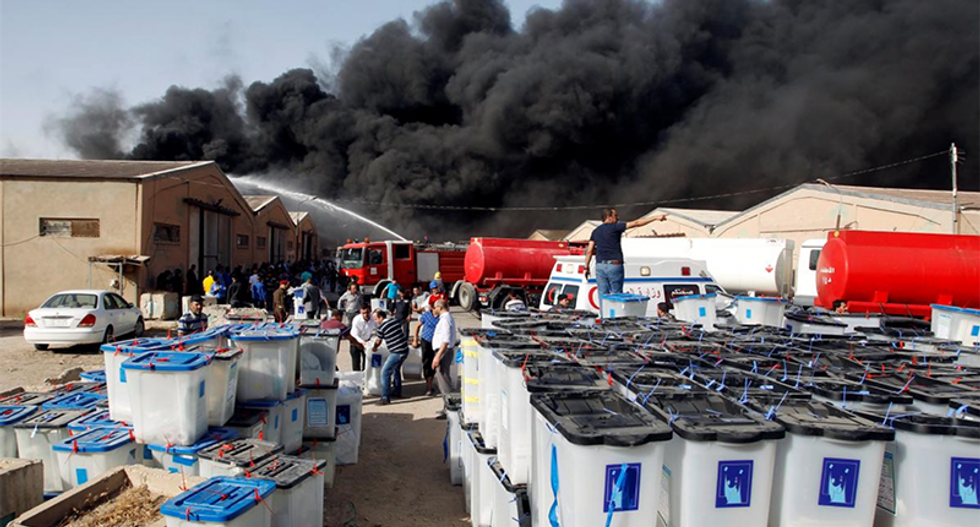 A storage site housing half of Baghdad’s ballot boxes from Iraq’s parliamentary election in May has caught fire, just days after parliament demanded a nationwide recount of votes, drawing calls for the election to be re-run.

An Interior Ministry spokesman said later the fire was confined to one of four warehouses at the site. State television said the ballot boxes were being moved to another location under heavy security.

Authorities did not say whether they believed the fire was deliberately set, but its timing undermined the results of an election whose validity was already in doubt. Fewer than 45 percent of voters cast a ballot, a record low, and allegations of fraud began almost immediately after the vote.

Prime Minister Haider al-Abadi, whose electoral alliance came third in the election, said on Tuesday that a government investigation had found serious violations and blamed Iraq’s independent elections commission for most of them.

A recount could undermine nationalist cleric Moqtada al-Sadr, a long-time adversary of the United States whose bloc won the largest number of seats in the election. One of Sadr’s top aides expressed concern that some parties were trying to sabotage the cleric’s victory.

Salim al-Jabouri, the outgoing speaker of parliament, said the fire showed the election should be repeated.

“The crime of burning ballot-box storage warehouses in the Rusafa area is a deliberate act, a planned crime, aimed at hiding instances of fraud and manipulation of votes, lying to the Iraqi people and changing their will and choices,” he said in a statement.

Jabouri narrowly lost his seat in May and had been one of the strongest proponents of a recount before the fire. His call was seconded by Vice President Iyad Allawi, the leader of the electoral alliance Jabouri ran as part of.

Top Sadr aide Dhiaa al-Asadi said the fire was a plot aimed at forcing a repeat of the election and hiding fraud.

“Whoever burned the election equipment and document storage site had two goals: either cancelling the election or destroying the stuffed ballots counted amongst the results,” he tweeted.

The fire took place at a Trade Ministry site in Baghdad where the election commission stored the ballot boxes from al-Rusafa, the half of Baghdad on the eastern side of the Tigris river. Baghdad is Iraq’s most populous province, accounting for 71 seats out of the Iraqi parliament’s 329.

The site was divided into four warehouses, said Interior Ministry spokesman Major General Saad Maan. Only one - housing electronic equipment and documents - had burned down, he said.

Firefighters were trying to stop the fire from spreading to the remaining three warehouses, where the ballot boxes are stored, he said.

“It is possible there were also some ballot boxes in the warehouse that caught fire, but most of the important boxes are in the three warehouses, where the fire has been controlled,” he said in a video message from the site of the fire.

The law mandating a manual recount also mandated the board of the election commission be replaced by judges. Earlier on Sunday, the Supreme Judicial Council, Iraq’s highest judicial authority, named the judges who will take over replace the commissioners.

The council also named judges to replace the commission’s local chiefs in each of Iraq’s 18 provinces, another measure mandated by parliament.

The board of commissioners has said it would appeal against the law forcing the recount.