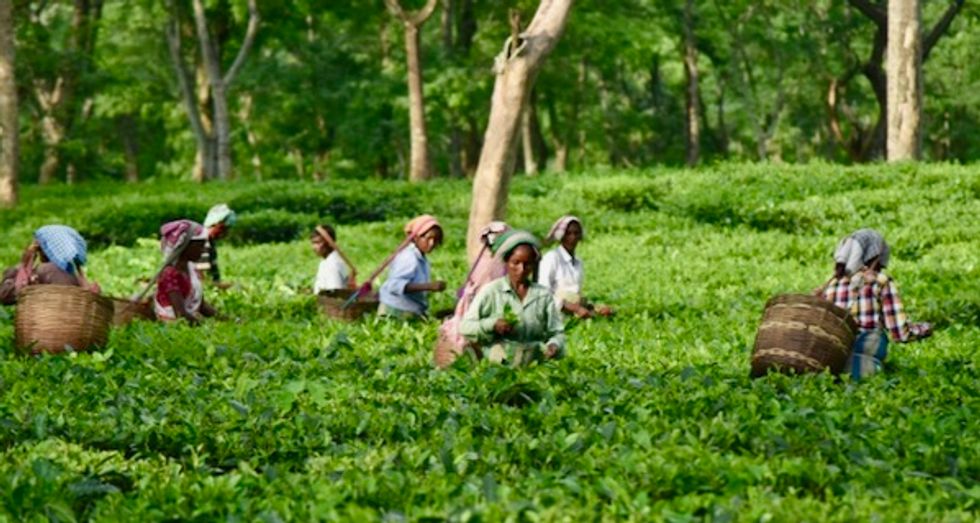 Indian tea farmers, many of them women, are scraping a living, Oxfam says AFP/File / STR

Supermarkets in the West are using their purchasing power to force suppliers to cut their prices, contributing to exploitation and even forced labour of millions of farmers worldwide, a global charity said Thursday.

"Millions of women and men who produce our food are trapped in poverty and face brutal working conditions, despite billion-dollar profits in the food industry," Oxfam International said as it released a report titled "Ripe for Change".

"From forced labour aboard fishing vessels in southeast Asia, to poverty wages on Indian tea plantations and hunger faced by workers on South African grape farms, human and labour rights abuses are all too common in food supply chains," the report said.

In surveys conducted in five countries last year, Oxfam said it documented what it called "unfair trading practices" by supermarket giants such as setting prices below the cost of sustainable production.

They were also unwilling to raise prices in order to take into account increases in the minimum wage, it said.

Such practices left the workers at the bottom of the supply chain to pay the heaviest price.

In Thailand, more than 90 percent of workers at seafood processing plants said they had gone without enough food the previous month, Oxfam said.

Around 80 percent of those workers were women, it added.

In Italy, where many farm workers are migrants, 75 percent of women working on fruit and vegetable farms said they or a family member had to miss meals because they could not afford to buy enough food.

"It is one of the cruellest paradoxes of our time that the people producing our food and their families are often going without enough to eat themselves," Oxfam said.

The charity criticised major European and US supermarkets for failing to ensure that food producers were treated with dignity.

Part of the reason inequalities were increasing, Oxfam said, was because of supermarket chains' drive to deliver year-round choice at a low cost.

The main beneficiaries from this drive, according to the report, are supermarkets themselves -- with little thought given to the working conditions of people who produce the food.

"The eight largest publicly owned supermarkets in the world generated some $1 trillion from sales in 2016 and nearly $22 billion in profit," Oxfam said.

It plans to launch a campaign to urge supermarkets to "crack down on inhumane working conditions".

"In many cases, giving back just one or two percent of the retail price -— a few cents -- would be life-changing for the women and men who produce the food on their shelves," she said.