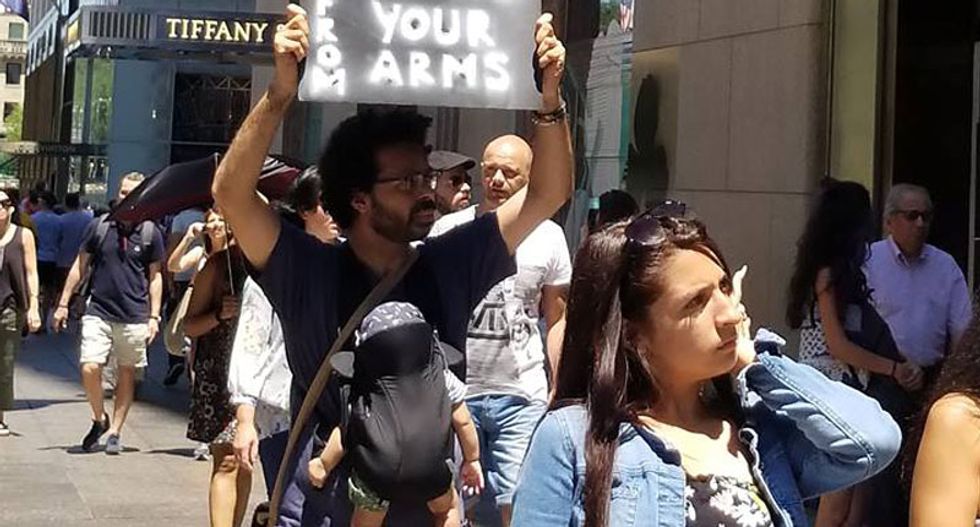 If I get arrested, will they take my baby? I looked at the cops guarding Trump Tower, lifted my sign that read, “Imagine Your Child Being Ripped from Your Arms” and marched in front of its doors. Tourists stared. A red-faced man, rushed at me.

It was my first Father’s Day. My son was twelve weeks old. I loved him like found treasure. Every morning, he smiled at me. I kissed his belly and he giggled. I tickled his feet and held him. During feedings, I read about refugees at the Mexican-U.S. border, where nearly 2,000 children were stripped from their parents. What if that was me? What if burly uniformed men, packing guns, took my son from my arms?

I’d explode. I’d be a stick of walking dynamite. I’d want to kill until he was in my arms again. I never felt murderous rage until I realized my child could be taken from me. I did not know how dangerous love was until I held my baby.

Reading the news of the families, pulled apart like taffy, I knew my rage was a privileged rage. The mothers and fathers, held in detention centers had to swallow it in order to figure out U.S. bureaucracy and get their kids back. I saw so deep grief on their faces and felt their panic in my chest, parent to parent.

Father’s Day was coming and I planned to protest the man who destroyed these families. The one and only, Donald Trump, who for my whole life in New York, hovered over the city like it was a giant Monopoly game. I hated him, then. I hated him more as president; who acted as if America was one of his hotels. Since immigrants couldn’t pay the toll, off to jail, they and their children went. No pass.

I lifted my son, put him into our Baby Bjorn and picked up the sign that read, “Imagine Your Child Being Ripped from Your Arms.” On the subway, my partner calmed our baby. I asked had her permission to do this protest. Some Trump voters see him as they Second Coming of George Washington. They could attack me.

We got to Trump Tower and it looked like a fortified castle. Stone blocks encircled the front. Police leaned on the guardrail. Tourists gawked up at the tower and posed in front of the Trump logo for a selfie. New Yorkers on the go, weaved quickly through them. My partner and I looked at each other, she kissed our son and gave me the sign.

I marched into the crowd and it was an out of body experience. All these faces turned to stare at me and it felt like getting blasted by force beams. The cops spotted me and I made an odd, calm down gesture with my hand. Going by them, I said hello. I turned to the machine gun, toting guards, said hello again. I worked all the male frequencies, spoken and subliminal, saying non-verbally, calm down, it’s a baby not a bomb and you know Trump’s bullshit is wrong, so don’t come at me.

The cops nodded and turned away. Some people scowled, some smiled but most were curious. I looked at everyone who passed by and poked them with my stare. Out of town families, stiffened up and avoided my gaze while their kids, took photos before being dragged off. Wealthy tourists, who came to Trump Tower as if on a pilgrimage to a Temple of Privilege, seemed scared or ashamed.

Hoisting the sign, higher; I felt my body vibrate like a magnet. It was an emotional vortex where no one knew who I was or what was going on. They passed by the sign and read, “Imagine Your Child Being Ripped from Your Arms”.

A talk Black woman smiled. A white family, thanked me. The Latino doorman, turned his head but tried not to be seen, seeing me. I felt for him because he was caught between two roles, servicing Trump Tower and knowing what Trump did to Latino families. A red faced, white man snarled, “What’s the protest for?” I told him Trump’s policy of separating families at the border. He cursed and stormed off.

I held the sign as high as I could and kissed my son. My partner kept watch on the crowd. People saw me, baby on my chest and the sign, standing under Trump Tower and were forced to know that what Trump did to families was terrible and cruel. Facing each other, we all knew that thousands of miles away, fathers and mothers, wanted to simply hold their children and love them.

I kissed my son again and again. It was Father’s Day in America.