Trump thinks Kim Jong-un is his new best friend -- what happens when he realizes he's been played? 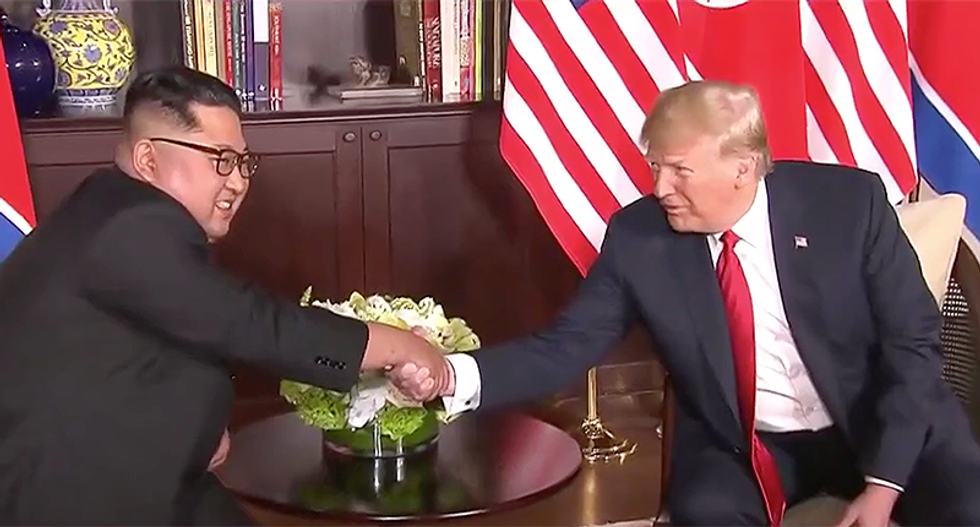 Now that the dust has settled on the Singapore summit and we've all watched that bizarre White House produced propaganda film at least half a dozen times just to be sure we weren't dreaming, it's worthwhile to look at the event with fresh eyes and ask ourselves if it really was as surreal as it seemed to be. As I wrote on Tuesday, the signed agreement didn't add up to much, despite's Trump's predictably tiresome hype that it was the most spectacular deal any two leaders had ever made in the history of the world. It's basically a watered-down version of earlier deals that ultimately fell apart and a recommitment to the one that Kim Jong-un and South Korean President Moon Jae-in signed a couple of months ago.

Trump later said in his press conference that he was going to halt regional war games because they were unnecessarily provocative (for which he received nothing in return) surprising the South Koreans and the Pentagon. It is still unclear how and why that announcement happened but last January the Wall Street Journal reported this, which offers a clue:

Mr. Trump had an idea about how to counter the nuclear threat posed by North Korea, which he got after speaking to Russian President Vladimir Putin : If the U.S. stopped joint military exercises with the South Koreans, it could help moderate Kim Jong Un’s behavior.

It's nice of Putin to offer Trump such advice but any other U.S. president might have been just a little bit skeptical of his motives. It serves the Russian president's interests to drive a wedge between the U.S. and its allies and hasten an American withdrawal from the region. One imagines that Chinese President Xi Jinping was equally pleased to see Trump take that advice and seek nothing in return. Everyone's happy but America's allies.

North Korean state media reported that Trump offered the concession personally during the two leaders' 45-minute unrecorded meeting, which raises the question why it wasn't included in the written agreement. But then North Korean state media is also saying that Trump told Kim that he's going to lift U.S. sanctions, which Trump said he did not do. According to the Wall Street Journal:

The report quoted Mr. Kim as saying that, if the U.S. were to take “genuine measures for building trust,” then the North could reciprocate in a “commensurate” fashion — a clear suggestion that U.S. concessions would have to come before any North Korean move...The report also suggested that Mr. Trump had adopted the North’s preferred phased approach toward any denuclearization process, saying the two men had agreed to the “principle of step-by-step and simultaneous action.”

Trump indicated in interviews yesterday that Kim was rushing back home to start "de-nuking" immediately. He certainly didn't say he'd agreed to a "principle of step-by-step simultaneous action."

Unfortunately, we have no way of knowing what the truth is. Both leaders are untrustworthy liars and there is no record of their discussion. It's entirely believable that the North Korean government just made the whole thing up as a propaganda ploy, but it's just as easy to believe that Trump offered all those concessions in a closed-door meeting to please his new best friend. He has a habit of giving away the store to people he's trying to impress.

It will be interesting to see how the White House responds to this, because the president spent the day extolling the virtues of Kim Jong-un as if he were the second coming of Honest Abe and Mahatma Gandhi. He even said, “His country does love him. His people, you see the fervor, they have a great fervor,” apparently having no clue about the repressive regime's propaganda tactics.

Here are just a few of the glowing descriptions of his pal:

In an interview with Greta Van Susteren, Trump made clear that it's all very personal:

We had a great chemistry — you understand how I feel about chemistry. It’s very important. I mean, I know people where there is no chemistry, no matter what you do you just don’t have it. We had it right from the beginning, I talked about that and I think great things are going to happen for North Korea.

He told George Stephanopoulos, "I trust him and he trusts me."

Most observers and experts are wary of making too many sweeping statements about this, because the stakes are high and anyone with sense has to hope for the best. Perhaps Trump's vaunted salesmanship and personal outreach to the North Korean dictator is worth a try since so many previous attempts at more formal agreements failed. Who knows? Maybe Kim really is anxious to build some Trump-branded condos on the beach and open a McDonald's in Pyongyang. It's understandable that all of us would be relieved that the inane insults about "Little Rocket Man" have given way to inane compliments, if only to buy some time.

But as I watched footage of the summit, I couldn't help but think about what national security adviser John Bolton said a few months back:

Bolton believes the U.S. has to overthrow Kim Jong-un, period. He got himself into trouble with his comments that the U.S. would insist on using the "Libya model," and got sidelined, at least temporarily, by Secretary of State Mike Pompeo. Bolton stepped aside, said little and watched as the president kissed up to the North Korean dictator and basked in the glory of his delusional historic agreement. Now he's just sitting back, waiting for the moment when Trump realizes he's been betrayed.

Sen. Lindsey Graham, R-S.C., seemed to have a similar idea, only he seemed to want to play the role of Trump press agent and announce it to the world. He said,  “If you try to play Trump or back out, there’s going to be a war and nobody wants war. Look at what he said to Canada when he thinks he’s wronged."

This was the danger in letting Trump do his elaborate photo-op and then go all over the media praising Kim as his favorite new friend, telling everyone who will listen that they have "chemistry" and they trust each other. It's very personal for him now: Like the playground bully that he is, Trump will feel betrayed if he finds out that Kim doesn't feel the same way about their "special bond."

You can be sure that John Bolton has Plan B ready to go.

Rental cars becoming scarce and expensive for US travelers

Talk about sticker shock: The $600 price tag for Joe Pohlen to rent a car for two days was twice as expensive as his plane ticket.

The Michigan businessman was stunned, but the experience is becoming more common for US travelers, an unexpected consequence of the pandemic.