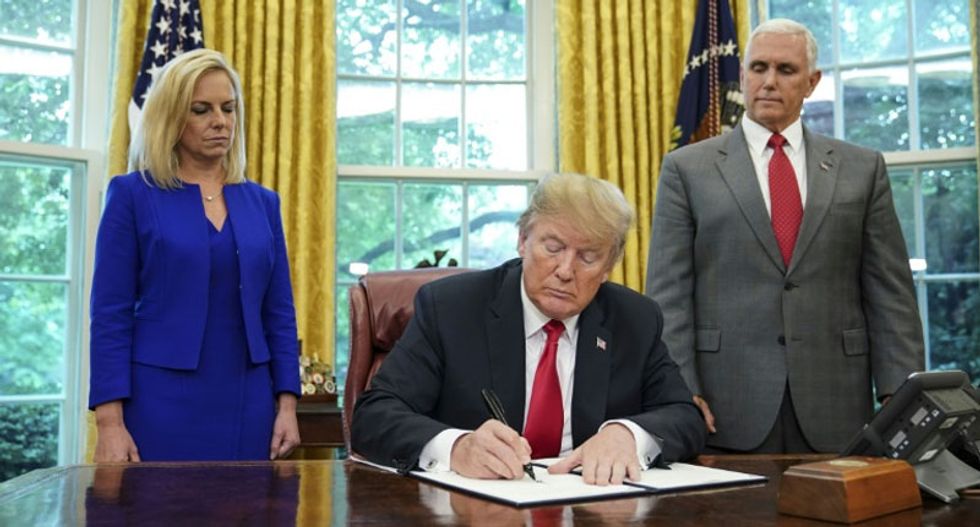 Our “I alone can fix it” president has gotten us in another fix, all right.

He had admitted as much the other day when he was in Singapore for his summit with North Korean dictator Kim Jong Un and bragged about the great deal he imagined he had made: “I may stand before you in six months and say, ‘Hey, I was wrong.’ I don’t know that I’ll ever admit that, but I’ll find some kind of an excuse.” He was, in his gruesome way, joking, but many a truth in jest, etc.

Just this week, The Daily 202, the compendium of political news from the Washington Post, made a list of some of the many times Donald Trump has tried to avoid responsibility—when he ended DACA, when Congress failed to completely scuttle Obamacare, when anti-gun violence legislation failed to pass, when the tax cut plan was in danger, when a failed covert operation in Yemen cost the life of a Navy SEAL.

“Time and time again, the president has sought to shift the blame for his own decisions and their consequences to his political opponents,” James Hohmann wrote. “He’s doing it again this week by falsely blaming Democrats for his own policy of forcibly separating migrant children from their parents at the border, which he could stop with one phone call.”

Children in detention camps without their mothers and fathers, the youngest in “tender age” facilities—now there’s a tawdry, Orwellian use of a loving word like “tender” if ever there was one. At first, Trump saw this inhumane fiasco as a success while simultaneously claiming it wasn’t his fault, pointing his stubby little fingers at everyone else; Democrats, Congress, the courts, Obama, of course, and even George W. Bush.

But at bottom, and I do mean bottom, Trump, such White House horrors as Stephen Miller, John Kelly, Attorney General Sessions, Homeland Security Secretary Kirstjen Nielsen and their compliant cronies are responsible and have been willing to lie to us time and again as they held babies hostage to Trump’s obsession with his stupid border wall.

Unrepentant, on Wednesday, a petulant Trump was made to bow to public outrage and political pressure and sign an executive order ending the breakup of families, although the zero tolerance policy continues, kids will still be in jail, albeit with their parents, and multiple court challenges are at hand. Anthony Romero, executive director of the American Civil Liberties Union, declared, “This executive order would replace one crisis for another. Children don’t belong in jail at all, even with their parents, under any set of circumstances. If the president thinks placing families in jail indefinitely is what people have been asking for, he is grossly mistaken.”

At the risk of stating the obvious, this executive order—one that only a few days ago the president said was an impossibility—is a move of cynical expedience without an ounce of the compassion he claimed to possess just before signing it. A day earlier, Trump had tweeted that the undocumented “infest our Country,” and the new order has huge problems—primarily the lack of a coherent plan to reunite the families that had been torn apart in the first place. Wednesday night, the New York Times reported, “the order does not say where the families would be detained. And it does not say whether children will continue to be separated from their parents while the facilities to hold them are located or built. Officials on a White House conference call said they could not answer those questions.”

The confusion and chaos that have characterized this administration reign. You can’t let your guard down—Nancy Cook at Politico reports that Stephen Miller “and a team of officials from the departments of Justice, Labor, Homeland Security and the Office of Management and Budget have been quietly meeting for months to find ways to use executive authority and under-the-radar rule changes to strengthen hardline U.S. immigration policies.”
In other words, never forget that this gang may be incompetent at a spectacular level but they’re mean to the bone. A couple of recent examples overshadowed by the border crisis will suffice. There are thousands.
On Tuesday, the Trump Administration rolled out new rules for cheaper health care plans for small businesses and individuals. “It’s going to be fantastic,” Trump bragged. “You’re going to save a fortune.” But it’s cheap because, as Amy Goldstein reports at the Post,

[The insurance] includes fewer benefits and consumer protections, bypassing significant requirements of the Affordable Care Act.
[...]
The new rules allow plans to exclude coverage for maternity care, prescription drugs, mental-health services and other ‘essential health benefits’ the ACA requires of coverage sold to individuals and small businesses… Congressional Democrats and critics across the health-care industry say the availability of cheaper, skimpier coverage will leave some patients stranded when they get sick.

For now, these “association health plans” aren’t allowed to charge more or deny coverage to those with pre-existing conditions. But the Trump White House is working on that, too, the Justice Department supporting a lawsuit by twenty Republican state attorneys general who want all the ACA’s consumer protections to go away—despite a prior Trump promise that those with pre-existing conditions would be safe. Don’t get sick, America.
And speaking of malpractice, the Secretary of Housing and Urban Development, Dr. Ben Carson, has proposed raising the rents of low-income tenants receiving federal housing assistance in the hundred largest metropolitan areas by roughly twenty percent. According to Juliet Linderman and Larry Fenn at the Associated Press:

That rent increase is about six times greater than the growth in average hourly earnings, putting the poorest workers at an increased risk of homelessness because wages simply haven’t kept pace with housing expenses.

…The proposal, which needs congressional approval, is the latest attempt by the Trump administration to scale back the social safety net, under the belief that charging more for rent will prompt those receiving federal assistance to enter the workforce and earn more income. ‘It’s our attempt to give poor people a way out of poverty,’ Carson said in a recent interview with Fox News.

A way out of poverty by raising the rent? Many of those affected already have a job or two or three. Minimum wage doesn’t cut it and making them stretch what little they have even further is no help at all. “We’re trying to get the hell out of here, but minimum wage is a big, big problem,” one woman told the AP reporters. “You can go to school, get an education and the job you’re going to get is still going to give you $10 an hour even though we’re the ones cleaning your dishes, cooking your food. Where are we supposed to live?”

All of this comes just as Philip Alston, an NYU law professor and United Nations special rapporteur on global poverty, has finished writing a report on extreme poverty in the United States. The Republican tax cut bill, he says, “overwhelmingly benefited the wealthy and worsened inequality,” and worse, “The policies pursued over the past year seem deliberately designed to remove basic protections from the poorest, punish those who are not in employment and make even basic health care into a privilege to be earned, rather than a right of citizenship."

Now a plan has been unveiled to consolidate large parts of the government, a scheme that, as per Glenn Thrush and Erica L. Green at the Times,

would reshuffle social welfare programs in a way that would make them easier to cut, scale back or restructure, according to several administration officials involved in the planning.
Among the most consequential ideas is a proposal to shift the Supplemental Nutrition Assistance Program, a subsistence benefit that provides aid to 42 million poor and working Americans, from the Agriculture Department to a new mega-agency that would have ‘welfare’ in its title—a term Mr. Trump uses as a pejorative catchall for most government benefit programs.

Trump and his crowd are dedicated to curdling the milk of human kindness. They fill their pockets while destroying America in a misbegotten attempt to take it back to a time of ethnic purity that never really was while establishing a new Gilded Age where only a handful can prosper at the expense of everyone else. We are becoming a mean boy nation, a nation once of immigrants but now one of bullies and tyrants. Our president breaks everything he sees, including our democracy and our republic.

Only we can fix it.
Opinion
Report typos and corrections to: corrections@rawstory.com.
Like this article ? Text `Support` to 50123 to donate.
READ COMMENTS - JOIN THE DISCUSSION