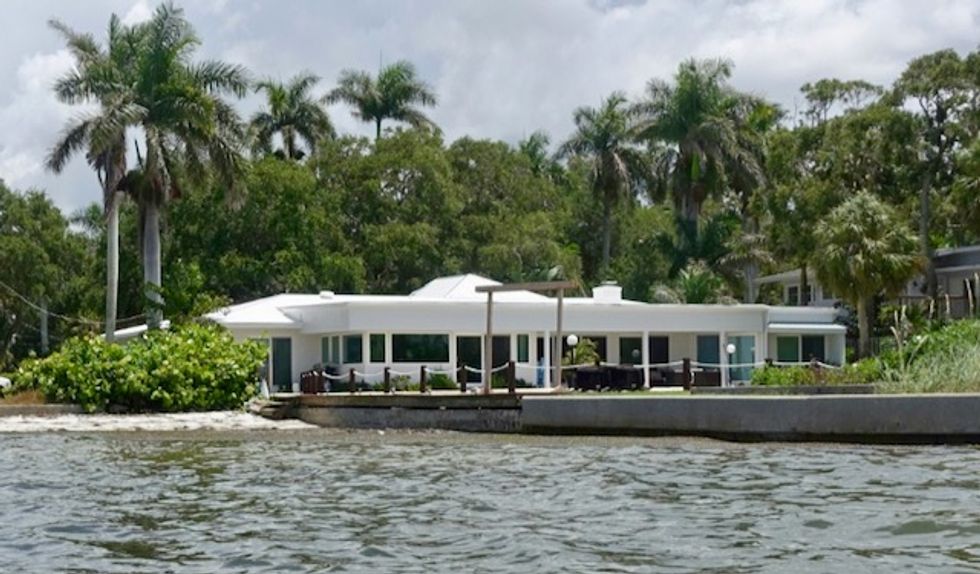 A low-lying home near sea level in the Indian Beach neighborhood of Sarasota, Florida, a state where tens of thousands of coastal residences are at risk of chronic flooding, a study says AFP / Kerry SHERIDAN

Along sun-splashed shorelines in the US state of Florida, home prices are on the rise, developers are busy building new complexes, and listings just blocks from the beach describe homes that are "not in a flood zone," meaning no flood insurance is required.

But experts warn that ignoring sea level rise won't prevent a looming economic crisis caused by water-logged homes that will someday become unsafe, uninhabitable and too costly to insure.

A reality check may come sooner than many may think, according to a report out Monday by the Union of Concerned Scientists, which finds as many as 64,000 coastal residences worth $26 billion in Florida are at risk of chronic flooding in the next 30 years, the life of a typical mortgage.

Across the United States, 311,000 coastal homes with a collective market value of about $120 billion in today's dollars are at risk of chronic flooding by 2045, it said.

By century's end, if current trends continue, more than $1 trillion in commercial and private US property may be at risk, "with Florida's coastal real estate among the most exposed," said the report.

And it's not because of the increased risk of hurricanes or storm surge.

Rather, the danger comes from flooding due to hide tides -- sometimes called sunny day floods, or nuisance flooding -- when water pools into streets, sidewalks, storefronts and homes.

"This risk is relatively near-term, well before places go underwater completely, and even in the absence of storms," said Rachel Cleetus, lead economist and policy director with the Climate and Energy program at the UCS.

Coastal real estate markets are not currently factoring in these risks, she told AFP.

"But market perceptions can shift and they can shift quickly in some places," she added, describing a market correction as "inevitable."

AFP / Kerry SHERIDANFlorida's coastal real estate is among the most exposed to chronic flooding in the US due to sea level rise, a study says

To make the risks clearer to people, UCS released a searchable online map that shows where the risks are highest, available at www.ucsusa.org/underwater.

The online realty site Zillow provided data for the analysis but did not take part in the scientific research.

The projections use a high-end scenario for sea level rise because that is an "appropriately conservative projection to use" when estimating risk to homes, often people's largest asset, Cleetus said.

Chronic inundation is defined in the report as flooding that happens at least 26 times a year.

By 2045, rising seas are expected to bring an extra 1.8 feet (55 centimeters) of water along Florida's coast, according to the UCS report.

By 2100, Florida can expect an average of 6.4 extra feet of water -- an awful lot given that the state's average elevation above sea level is only about six feet, with many places three feet or below.

"This is a slow-moving disaster," said Cleetus.

The low-lying Tampa Bay area, Miami and The Keys island chain face the most peril from sea level rise.

One worry is that insurance premiums will increase so much that coastal homes become unaffordable for those with fixed or lower incomes.

Local governments may decide to cut power and water to flooded neighborhoods.

Many will risk losing their largest financial asset -– their homes -- and municipalities will forfeit huge amounts of revenue from property taxes.

AFP/File / MARK RALSTON Hurricane Harvey in August, 2017, dropped 51 inches of rain over Texas in 24 hours and damaged these boats in a multi-level storage facility

The problem of outdated flood maps long predates US President Donald Trump, who has called global warming a hoax perpetrated by the Chinese, quit the Paris climate accords and rolled back environmental protections since taking office.

According to Desiree Companion, a certified floodplain manager employed by Sarasota County, the US government-issued flood maps that people consult when building or buying a home are decades old in many places.

During a free seminar at a local library this month, she said residents often tell her they don't need flood insurance because they aren't in a high-risk zone.

"If it rains where you are, you'd best be getting it," she told the seven people gathered in a library meeting room, where most of the 50 seats were empty.

Federal flood maps are based on risk of a "100-year-event," defined as 10 inches (25 centimeters) of rain falling in 24 hours, she explained.

Last year's Hurricane Harvey dropped 51 inches over Texas in that amount of time.

"Everybody is in a flood zone," she said.

Inaccurate flood risk information is just one of many factors fueling the crisis, said Jeffrey Huber, an assistant professor in the school of architecture at Florida Atlantic University.

"Nowhere is a realtor required to actually tell someone that the property they are purchasing is vulnerable to sea level rise," he told AFP.

"Who is telling them that their property is vulnerable if not a realtor? If not an architect?"

Most developers know, and so do most municipalities, he added.

As much as 85 percent of the property at risk might be saved if the Paris Agreement goals are met, limiting warming to a maximum of 3.6 F (2 C) this century, she said.

"The longer we wait to drastically reduce emissions, the less likely it is that we will achieve this outcome."