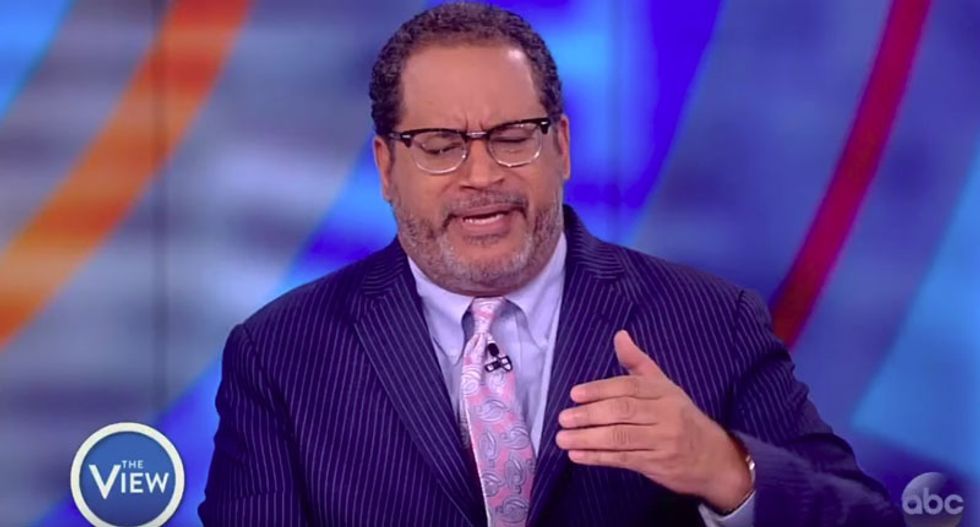 On Monday’s “The View,” professor Michael Eric Dyson explained why “morally conservative” black people would vote for the GOP “if Republicans weren’t so bigoted and weren’t so racist”—a characterization co-host Meghan McCain protested.

Dyson, quoting Gore Vidal, described a “United States of amnesia,” a “country that is so addicted” to forgetting its history.

“We got a guy who gets up every morning and excretes the feces of his moral depravity into a nation he has turned into his psychic commode he is a bigot-in-chief and a racist-in-residence,” Dyson said.

Asked to explain the difference between racism and bigotry, Dyson argued “racism presumes a kind of systemic power that they have access to, to reinforce others’ lives as living hell.”

McCain asked Dyson about the support for Donald Trump from African Americans, wondering what impact those voters will have on the midterm elections.

“Donald Trump is a wakeup call for all of us,” Dyson insisted, recalling how he stood up to black voters in 2016 who said there was “no difference between Donald Trump and Hillary Clinton.”

Clinton, Dyson said, has “more knowledge in her litter finger than this man has in his entire body.”

Dyson then described why black voters should vote Republican, explaining “black people are morally conservative even if they’re politically progressive.”

“If Republicans weren’t so racist they could encourage black people who are morally conservative to be on their side,” Dyson said.

Asked by Joy Behar whether he thinks all Republicans are racist, Dyson offered, “enough of them to make a difference, enough of them who don’t speak up.”

“Where are the Republicans when unarmed black people are assaulted by police?” he wondered. “I want white folk to speak up. That’s not just a black problem, that’s not a female problem, that’s an American problem. Speak up in this country.”

McCain tried to circle back around to the midterms, wondering how Trump got more of the black vote than her father, John McCain, or Trump’s forerunner Mitt Romney.

“Thirteen percent of black men voted for Donald Trump,” Dyson said. “Part of that is patriarchy and sexism … but 54 percent of eligible white women voted for Trump too, that’s the big mystery. What’s up Lucy? You got some ‘splaining to do.’”