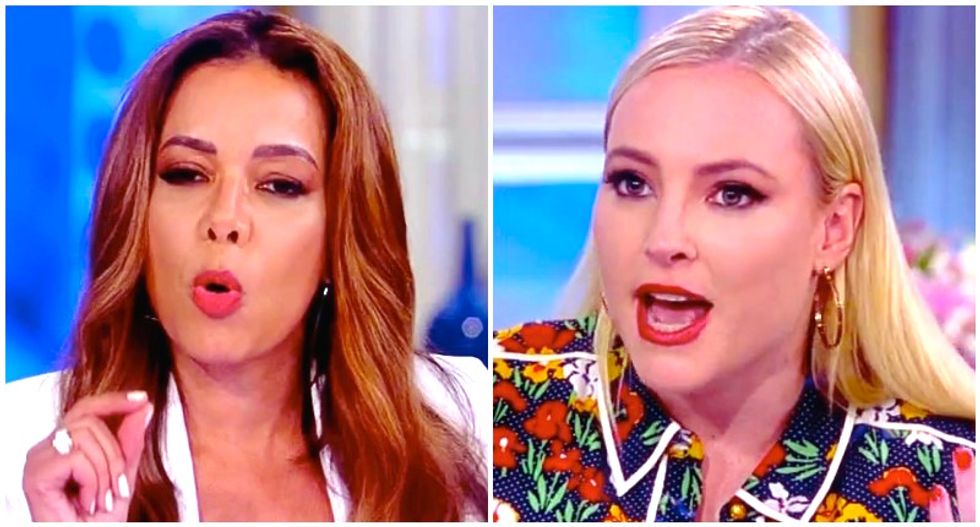 Meghan McCain offered a textbook example of Republican efforts to normalize President Donald Trump in spite of his personal attacks and constitutional abuses.

"The View" co-host admitted the president and his advisors had publicly insulted her family, but she still believes Trump fit into the historical framework of presidential norms.

She agreed last week that the Trump administration's family separation policy was immoral and wrong, but McCain admitted she could overlook those human rights violations.

"His two Supreme Court decisions, big wins for us, and he has made decisions that I agree with," McCain said.

"When you are talking about vitriol, I'm sorry -- my family has been at the direct target of that, and I understand that as well," she continued. "But as commentators, we have to call balls and strikes like we see them, because if you start turning into Trump, as some commentators in my own party have done, and you become him, everyone stops listening to each other one way or the other, and we have to be intellectual."

Co-host Sunny Hostin said the president should take more responsibility for setting the tone his apologists decry from the left.

"The tone has to come from the top," Hostin said. "I don't think that we have seen this type of vitriol before. I think this is unchartered territory. I think this is new, and quite frankly, I would be more comfortable with the Republican Party if they stood up, if leadership stood up and said something to this president."

Co-host Joy Behar said the GOP would never do that, and Hostin agreed.

"Let's face it," Hostin said. "This president not only is unhinged on Twitter, let's never forget that a woman died at that tiki torch-holding rally (in Charlottesville), and he said there are good people on both sides, and that, for me, set the tone."

Co-host Sara Haines said she doesn't believe that challenging Trump officials in public settings, as Rep. Maxine Waters (D-CA) urged her supporters to do, was helpful -- and McCain said the suggestion was outrageous.

"It's now socially acceptable to go up to people who work in the White House, which includes people in my family, and harass them in public," McCain said. "That could escalate easily. Steve Scalise, Gabby Giffords, if we're learning nothing, it's a dangerous world, and that messaging from Democrats is not going to fly in the real world."

Hostin said harassment was possibly illegal, and McCain quickly pointed out that was the word Waters used -- but her co-host refused to get sidetracked.

McCain suggested it was harassment to confront Trump officials in restaurants, but Hostin said Americans had a right to do that.