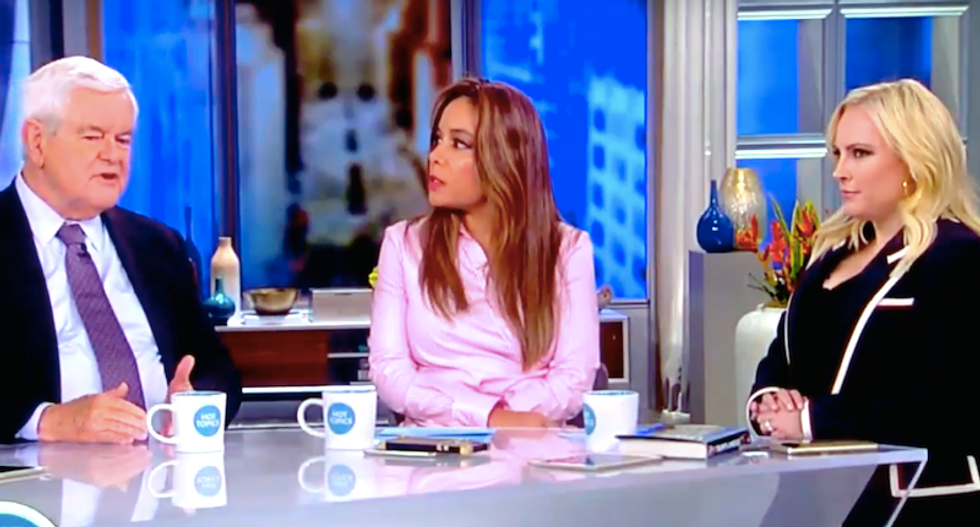 "The View" host Meghan McCain called for a commercial break after she and guest Newt Gingrich went down in flames attacking special counsel Robert Mueller's investigation.

The former House Speaker claimed the U.S. government had been corrupt since not long after he left office in 1999, and co-host Joy Behar challenged him to explain how the Mueller probe was rigged because it was not yet completed.

"How long did Watergate take?" she said. "I believe it was three years, and we didn't know anything about it until it came out. Well, yeah, there was the break-in but we didn't know Nixon was involved. It took a long time and a lot of investigation for that to come out. This is the same situation -- we don't know what Mueller has. He's tight as a drum, this guy. Nothing has leaked."

Gingrich insisted Mueller's team had leaked details of the investigation to the New York Times, and Behar challenged him to name one.

"A number of things have leaked," Gingrich said, and looked to McCain for help.

"A ton," McCain agreed, as Behar continued to ask them to name one example. "Well, I don't have it on my notecard right now, but a ton -- through his professor friend."

Co-host Sunny Hostin reminded McCain she was thinking of former FBI director James Comey, who passed along some of his own memos to a friend who then gave the documents to Times reporters.

"That was actually a Comey leak," Gingrich agreed, and tried a different angle. "My only question is, again, I know it's simple-minded -- he's had $17 million, he's had a year and a half."

That's when Hostin, a former federal prosecutor, swooped in with a kill shot.

"Maybe it's $1 million per indictment -- 17 indictments," Hostin said, as the audience erupted in applause.

Gingrich moved on to yet another topic.

"Let me give you an example," he said. "They indicted a Russian firm which came into court recently and said, 'Try us, because we did not exist on the date you indicted us for.'"

That's when McCain heeded a producer's directive and tapped out.

"Can we go to a commercial break, please?" McCain said. "Thank you. Newt Gingrich is sticking around, thank god, and we'll be right back."