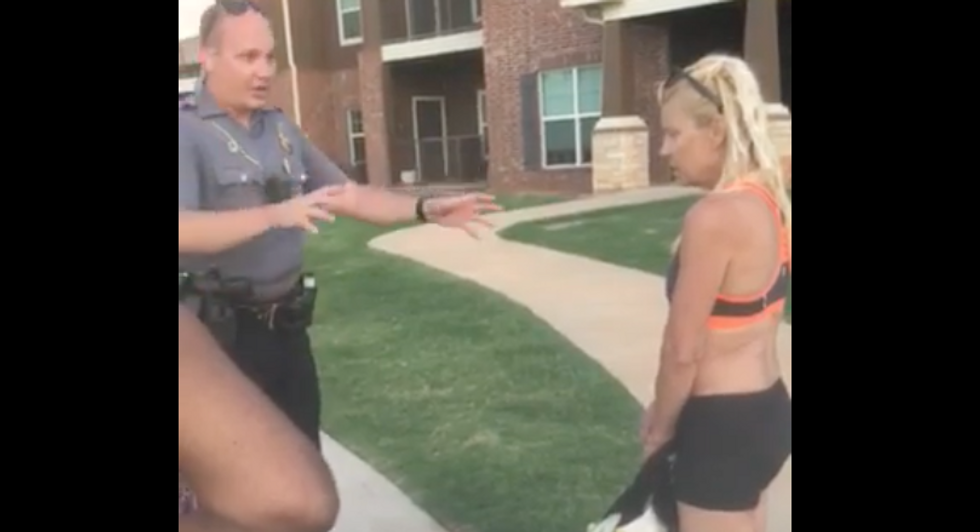 A police officer speaks to a woman who called police on her black neighbors after they refused to comfort her. Image via screengrab.

In the latest instance of a white person calling police on black people, a woman appears to have called the cops on her pool-going neighbors after they refused to comfort her when she was depressed.

A viral video posted by a woman in Oklahoma City, OK shows an interaction between a white woman and a police officer. The woman explained that she called police following an interaction at one of the apartment complex's pools in which she asked another woman if she could speak to her. After a brief interaction in which the white woman told one of the black women that she's depressed, the conversation should have ended — but didn't.

In the video, the woman — who appears either intoxicated or mentally unstable — first claimed the group of black neighbors began making fun of her immediately after she revealed that she's depressed and then threatened to physically assault her.

But she later admitted that she too threatened to beat up one of the members of the group. The white woman also noted that the people recording the interaction with the officer also recorded the incident at the pool, which made the responding officer incredulous.

"Why would they record you if you weren't causing a scene or something?" he asked her.

The officer later revealed that when he first entered the complex, three men approached him and said the person who called the police is "either drunk or on something and is causing a scene."

"I need you to really be honest with me," he continued. "Were you out here causing a scene?"

"Does that sound plausible to you?" he asked her.

Later, the woman claimed she was "a minority" in the interaction as her story devolved.