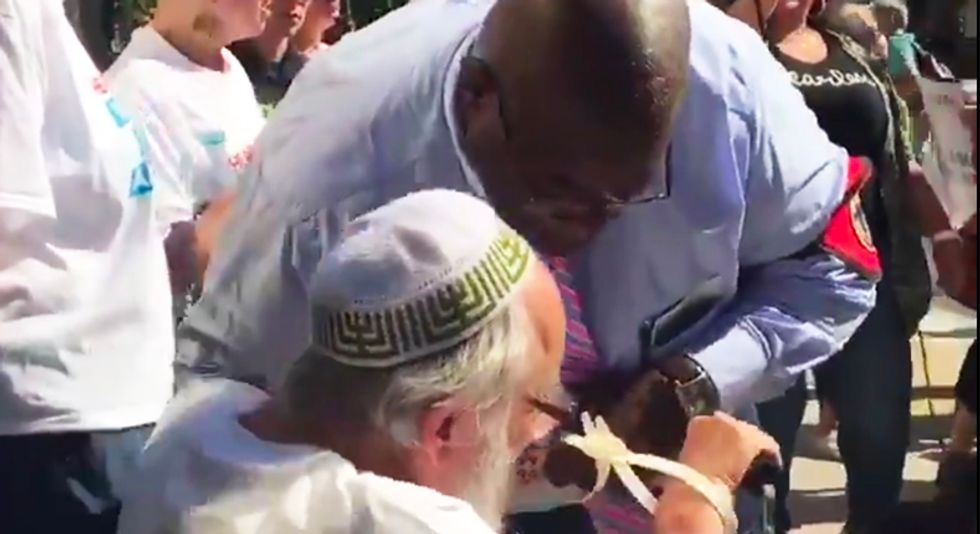 In video uploaded to Twitter, Philadelphia police officers are seen placing 85-year-old Rabbi Arthur Waskow, of the Shalom Center, in restraints before loading him into a police van for protesting outside of an ICE facility.

As protests occurred around the country against President Donald Trump's "zero tolerance" policies against amnesty-seeking immigrants attempting to get into the country, ICE officials are also having to deal with sit-ins and protest outside centers where immigrant children are being held.

Identified by Twitter user @StanceGrounded, Rabbi Waskow can been seen sticking his hands out for the pull-ties to be placed on his wrists as the officer had to help him out of his chair and and hold him up so he could use his cane.

In a speech the rabbi gave before being taken into custody, he said, "Criminals are living in the White House who would tear away even nursing children from their mother's breasts -- we implore you as citizens to be aware of the criminals that are wrecking the decent lives of decent families."

You can watch video of part of his speech as well as his being taken into custody below via Twitter.

This elderly man is Rabbi Waskow. He was arrested protesting outside an ICE facility in Philadelphia. RETWEET THI… https://t.co/Gbys0mwTok
— StanceGrounded (@StanceGrounded) 1530365631.0

Before he was arrested "Criminals are living in the white house who would tear away even nursing children from thei… https://t.co/b5Uvu71PfK
— StanceGrounded (@StanceGrounded) 1530371142.0