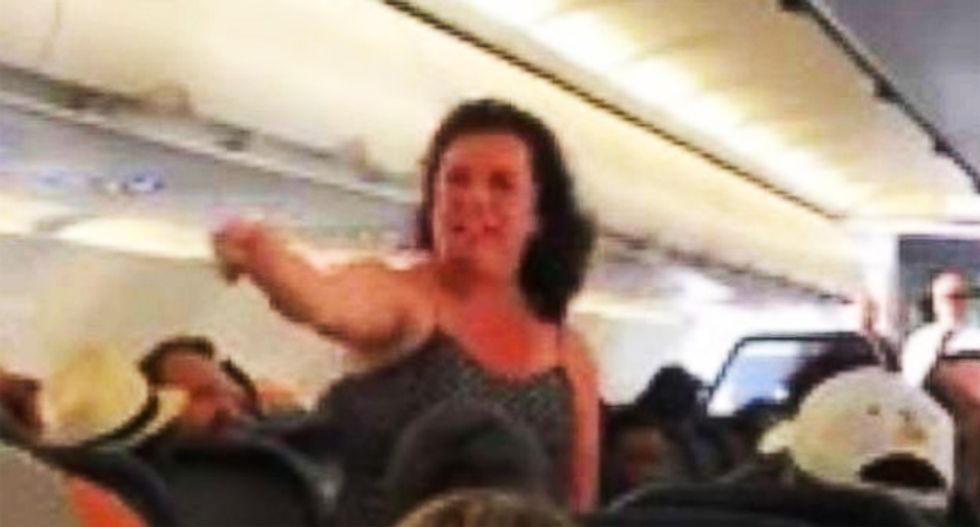 Police in Rochester, Minnesota were called to assist with a passenger on a Spirit Airlines plane who became enraged after the flight had to be diverted when another passenger became seriously ill.

According to KHOU, the flight was bound for Minneapolis when an attendant noticed one passenger had gone into a coma, necessitating an emergency landing.

Responding to the change in plans, a woman on the flight erupted into a profanity-filled rant, running up and down the aisle and threatening her fellow passengers.

“I was thinking I need to protect my 15-year-old daughter (who was headed to Detroit for a volleyball tournament),” said passenger Stephanie Calder. “I (was just) worried (the angry passenger was) going to go even more irate and so I just put my back toward my daughter and shielded my daughter in case this woman decided to. I was one row behind the emergency exit door. Now, we were landed but who knows what this woman could have done.”

On video that was posted to Facebook, the woman can be seen ranting, shaking her fists and menacing passengers -- many of whom recoiled while others filmed the incident.

According to Chianti Washington who filmed the tirade, "She was yelling at the two gentlemen that were trying to block her -- it was very scary. She would just not stop, and as police escorted her off the aircraft continued to remain belligerent."

Police state that the woman -- who they refused to identify -- was taken to a local hospital for evaluation after they were told she was in the military and suffered from PTSD.

In a statement Spirit Airlines apologized, stating: "Yesterday morning a flight from Houston to Minneapolis had to land in Rochester, Minnesota due to a Guest experiencing a medical emergency. On the ground in Rochester, another passenger became erratic and irate and was removed from the aircraft with the assistance of law enforcement. We apologize to our Guests who had to witness this and for the inconvenience of the delay. Safety if our top priority at Spirit Airlines."