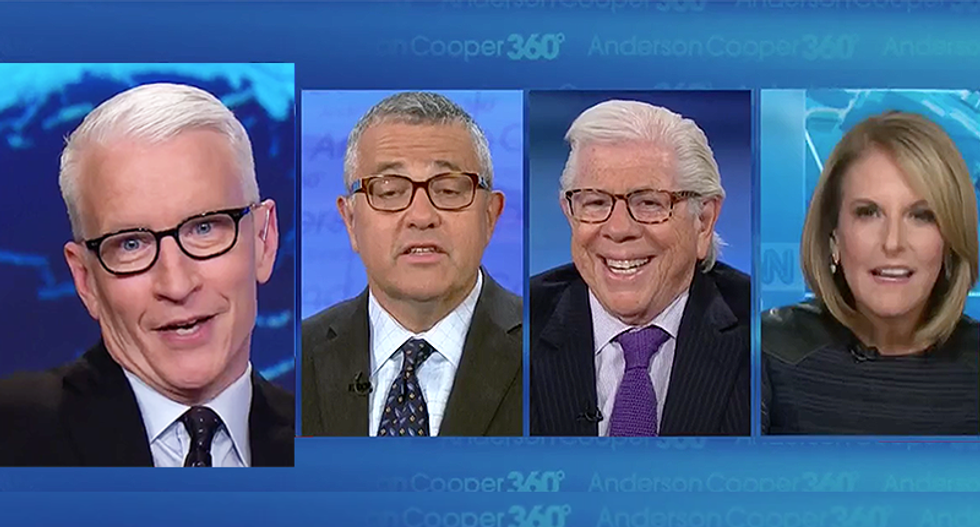 CNN political analyst Gloria Borger noted that congress gets walks right up to the line of holding President Donald Trump accountable, but thus far they have yet to step over that line.

"He wilts," Borger said of Trump when faced to answer whether Putin is a liar. "Here is this strong guy, supposedly, this tough guy on Russia, supposedly, telling us how tough he's been on Russia, and he completely wilts on this. He has no outrage."

She continued, saying she expected the president of the United States would both know and believe his own intelligence agencies.

"Never mind looking at the intelligence himself, which it seems clear he really hasn't done," she went on. "But you would expect the president to be outraged and strong and stand next to Vladimir Putin and talk about this rather than saying he was powerful in denying it. And instead what we have is a president who clearly is so afraid of either delegitimizing his own election."

"It's warfare. It is an attack on our very system of free elections in this country," Bernstein said. "But something very significant has happened over these three and four days, and that is that Republicans in Washington on the Hill are saying to each other, 'We do not trust this president. We can't trust him with the security of the United States. We do not believe him.' But the question is will they--?"

Cooper cut in to say that the elected Republicans are only saying it to each other and they're whispering when doing that. Bernstein agreed, but noted that they're also speaking to reporters and he wants to see news agencies demand answers from Republicans.

"Well, what about this, Mr. Republican?" Asked Bernstein. "We want to hear from you on the record. Tell us, is the president truthful? Can you entrust him with the national security of the United States? We've got a job to do now. The president has set this up for us to do a job. If they say, 'Oh, no, we can't say anything to you reporters,' we've got to keep our double-talk up as members of the congress of the United States, but something profound has happened. It is clear to everybody but the base that this president is not capable of being truthful."

That's when the panel burst out laughing.

"Profiles in courage?" asked Bernstein laughing. "There's no one!"