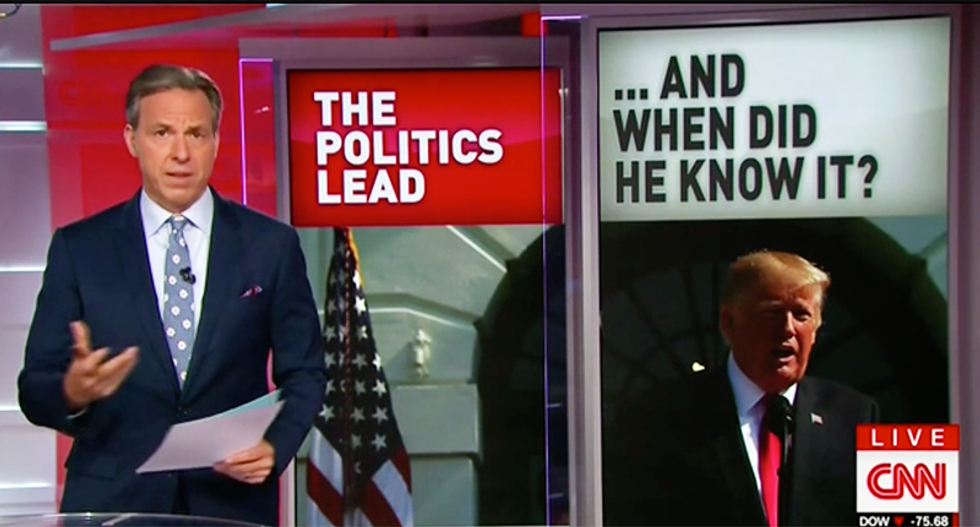 CNN's Jake Tapper referred to the final scene of the film "Reservoir Dogs," saying that it was remarkably similar to President Donald Trump. The only difference, according to Tapper, is that Trump fires BS at people instead of bullets.

The lies are stacking up against President Donald Trump regarding the Trump Tower meeting with Russian lawyer Natalia Veselnitskaya. During an appearance on Chris Cuomo's "Prime Time," Thursday, Trump attorney Rudy Giuliani flipped from singing the praises of Michael Cohen to saying he's a "pathological liar."

Playing a clip of the late Howard Baker, Tapper asked, "What did the president know, and when did he know it?"

Cohen said that the president knew that the meeting was happening at Trump Tower, which explains why he was teasing "dirt" in speeches in the days leading up to the meeting. The "dirt" he promised, however, never materialized.

He then turned to Donald Trump Jr.'s contradictory statements about the meeting. During a Fox News interview, Jr. claimed that the meeting was such a "nothing" that "there was nothing to tell." Both before and after leaving the meeting, however, Jr. had a phone call with a blocked phone number. The younger Trump told investigators he couldn't remember who it was he spoke to for 11 minutes. However, former campaign manager Corey Lewandowski told the House Intelligence Committee that Trump's "primary residence has a blocked [phone] line."

Tapper then quoted "The chance that Don Jr. did not walk these Jumos up to his father's office on the twenty-sixth floor is zero," former senior aide Steve Bannon told Fire and Fury author Michael Wolff.

The elder Trump also dictated his son's misleading statement on the Trump Tower meeting that was released to the public.

It's for that reason that Tapper believes the whole country is enduring a deluge of BS.

"It's like the last scene in 'Reservoir Dogs.' Except they're firing BS instead of bullets," he said.

Watch his take below: