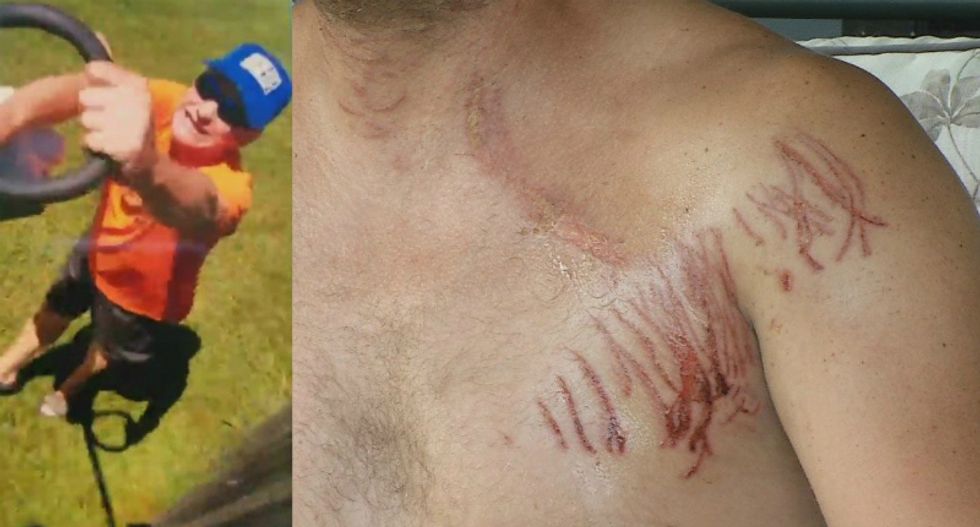 An older Kentucky man who has been the subject of dozens of 911 calls has most recently been the perpetrator of an alleged weed-whacker attack on his neighbor he has a history of disputes with.

Louisville's WDRB reported that Thomas McMullan "looks like he fought with an animal and lost" after his neighbor, 67-year-old Larry Haynes, took a weed-whacker to his shoulder. Over the last four years, their increasing property-line disputes have resulted in 40 phone calls to local police, though the report noted that Haynes is the subject of at least 19 others from unrelated incidents, most from previous neighbors.

The 36-year-old father recorded cell phone video of Haynes attacking him, which he believed was related to debris left from fireworks he shot off on the 4th of July.

"Haynes pauses, then looks up and brings the [weed-whacker] blade toward the camera," WDRB's report read. "You can hear the contact and see the camera shake as the lawn-trimming device is hoisted toward the top of the fence."

"Call the police," McMullan said in the video. "He just attacked me with the f*cking weed eater."

Independence Day, the report noted, appears to be something of a "trigger point" for Haynes. In July 2016, McMullan captured his aging neighbor shouting "your wife sucks n*gger d*cks" at him while taunting party-goers and trying to get them to cross over onto his property.

"He pulled a gun over trash in his yard for fireworks with eight kids in my yard," Amanda McMullan, Thomas' wife, told WDRB of the 2016 incident. "I had it all on video, and [police] did nothing. It was dismissed."

Haynes' family consistently defends him, portraying the most recent incident and all those that came before it as "accidents" and their relative as "innocent." According to Bullitt County Chief Deputy Mike Cook, however, this incident presents much clearer evidence than the "he-said, she-said" instances Haynes was involved in in the past.

"It's never been taken seriously by the courts," McMullan told WDRB. "That just makes him think even more he can do whatever he pleases around here without any consequences.