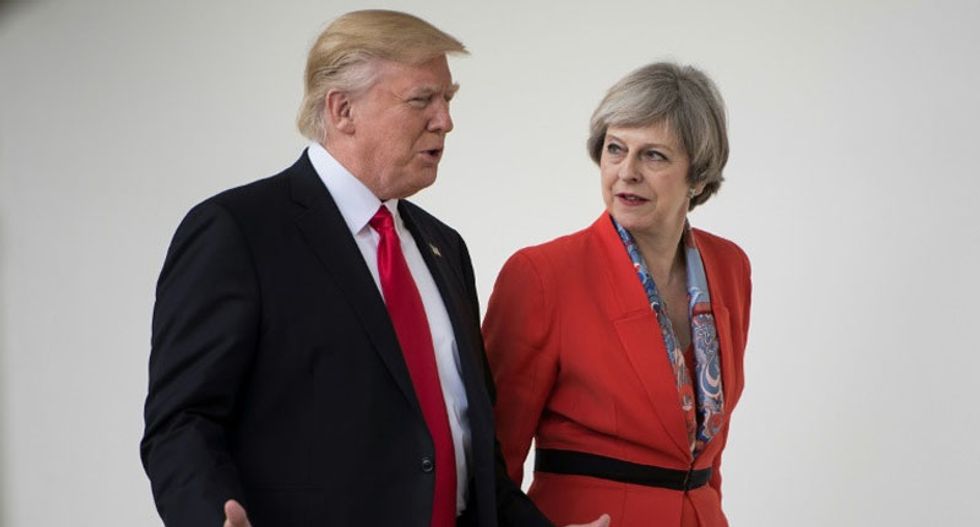 When Donald Trump visits Britain next week, Prime Minister Theresa May will have to face a harsh reality: Brexit makes Britain more dependent than ever on an alliance with the most unpredictable U.S. president in living memory.

Sandwiched between a NATO meeting and a summit with Russia’s Vladimir Putin, Trump’s first visit to Britain as president comes at one of the most important junctures for Europe and the West since the 1991 fall of the Soviet Union.

From challenging Western assumptions about the EU and free trade to courting the Kremlin and North Korea’s leader, Trump has delivered on his promise of an “unpredictable” U.S. foreign policy.

That leaves May, who held hands with Trump at the White House during her visit after his inauguration, in a difficult position as she seeks closer trade ties with the United States to offset the disruption of leaving the EU on March 29, 2019.(For a graphic of trips by UK and US leaders click tmsnrt.rs/2No3omh)

“The irony is that by leaving the EU, the United Kingdom will be less useful to Washington as an ally but it will also need the United States much more,” said Jeffrey A. Stacey, a former State Department official in Obama’s administration.

“So May has been thrown into the arms of the most unpredictable U.S. president in living memory,” Stacey said.

Over 50,000 people have signed up for a protest on Trafalgar Square in central London against the Trump visit, which will include a meeting with Queen Elizabeth and possibly even a round of golf at his Turnberry course in Scotland.

Even taking account of Trump’s penchant for deal making, the visit is likely to be heavy on rhetoric about an increasingly lopsided “special relationship” and short on specifics such as the details of a post-Brexit trade deal.

For supporters, Trump and Brexit offer the prospect of breaking free from what they see as obsolete institutions and rules that have weakened the United States and its allies relative to competitors such as China.

But for many British diplomats, Brexit marks the collapse of a 70-year British strategy of trying to balance European integration with a U.S. alliance based on blood, trade and intelligence sharing.

“May’s rushed diplomacy with Trump has been foolish: what has she actually got out of the relationship so far?” said one senior European diplomat in London, who spoke on condition of anonymity.

“You Brits are leaving Europe but do you really want to jump into the arms of Donald Trump’s America? And more importantly, do you have a choice?” the diplomat asked.

Trump’s victory in the 2016 presidential election shocked British diplomats in Washington and relations between May, a vicar’s daughter, and Trump have been strained at times.

The enduring image of May’s visit to the White House in January 2017, when she became the first foreign leader to meet the president after he took office, was Trump taking May’s hand to help her down the steps of a White House colonnade.

But any good vibrations from that moment soon dissipated when Trump, the same day, announced plans to ban migrants from seven Muslim-majority countries - a decision that drew fierce international criticism and appeared to blindside May.

Days later, thousands marched on parliament to protest the decision to offer a Trump full state visit to Britain, and 1.8 million people signed a petition saying the invitation should be canceled because he might embarrass the Queen.

Trump has repeatedly thwarted British and other European diplomatic overtures, withdrawing from multilateral agreements on climate change, human rights, and a treasured deal to curb Iran’s nuclear ambitions in exchange for lifting sanctions.

Officials around May insist that Britain still has the capability to influence Trump, outlining a handling strategy that involves appealing to his self interest, “planting the seed” of an idea and allowing him time to consider its merits.

But, much will rest on the personal dynamic between May, a staid, career politician who prides herself on careful decision-making, and Trump, the brash, often-bellicose, former reality TV star who declared last month he would know within a minute whether a deal could be struck with North Korea’s Kim Jong Un

“Theresa May gets a bit lost in all of that. She has neither been strong nor weak, there doesn’t seem to be any special affection.”

Asked at last month’s G7 meeting in Canada whether Trump was a “good friend” to Britain, May said: “The United States and the United Kingdom are good friends. President Trump and I work together.”

But just hours after the meeting concluded he tore up a joint communique on trade, equality and the environment that May and other G7 leaders had labored late into the night to agree.

Therein lies the difficulty for May.

“When he’s here, he’ll give, but I think when he walks away he will very quickly forget what the visit was about,” Vinjamuri said.