'Don't interrupt me': Michael Avenatti wipes the floor with Alan Dershowitz and his poor record of accuracy 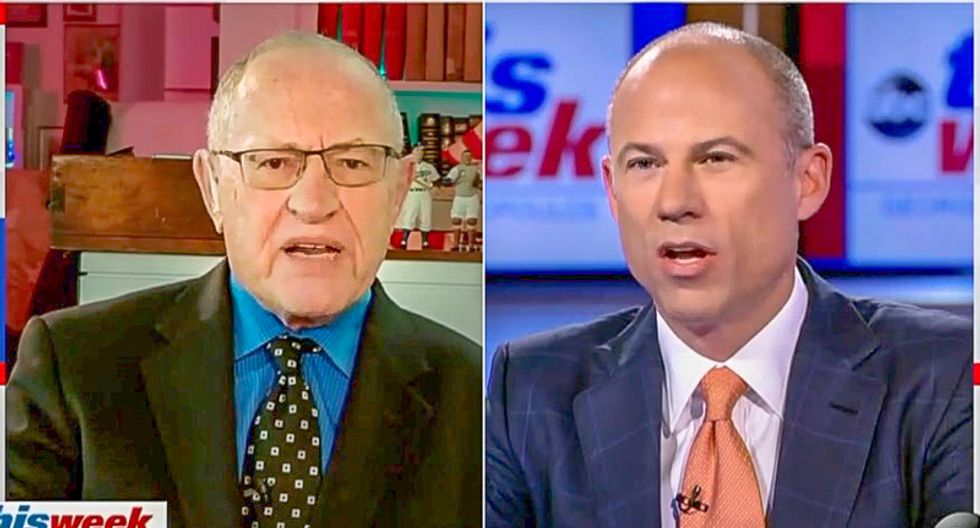 Michael Avenatti, attorney for alleged Trump mistress Stormy Daniels, on Sunday called out Alan Dershowitz for having a poor record of accuracy when it comes to predicting outcomes for the president's legal troubles.

During a panel discussion on ABC's This Week, host George Stephanopoulos reported that tapes had been leaked of Trump speaking to former personal attorney Michael Cohen. Trump claimed the two minute tape is exculpatory because he is heard saying that he cannot purchase the rights to the story of one of his alleged former mistresses, former Playboy Playmate Karen Mcdougal.

Avenatti argued that the release of the tape would impact Daniels' case against Trump "in a big way."

"I can tell you that for a fact there are multiple tapes," Avenatti revealed. "There are multiple tapes of President Trump, number one. That's first of all. That ultimately is going to prove to be a big problem for the president. You know that old adage, 'you live by the sword and die by the sword,' will be true in this case because the president knew his attorney had a predisposition towards taping conversations with people, and Cohen had shared tapes with the president along the way during the ten years of legal representation."

Avenatti added: "Number two, this shows that the president knew these payments were being made prior to the election. He was a participant in it, and he was advising in how it was going to be done, and none of that proves to be helpful to him or Michael Cohen as it relates to campaign finance violations."

"I'm not trying to get into anything personal," Dershowitz insisted.

"Please don't interrupt me," Avenatti shot back. "My accuracy rate over the last six months has been spot on in this case. And let me tell you this. If I'm wrong, then why don't we have Mr. Trump or his attorneys come forward today, right now and claim there are no other tapes. You're not going to hear that because there are other tapes. Period."