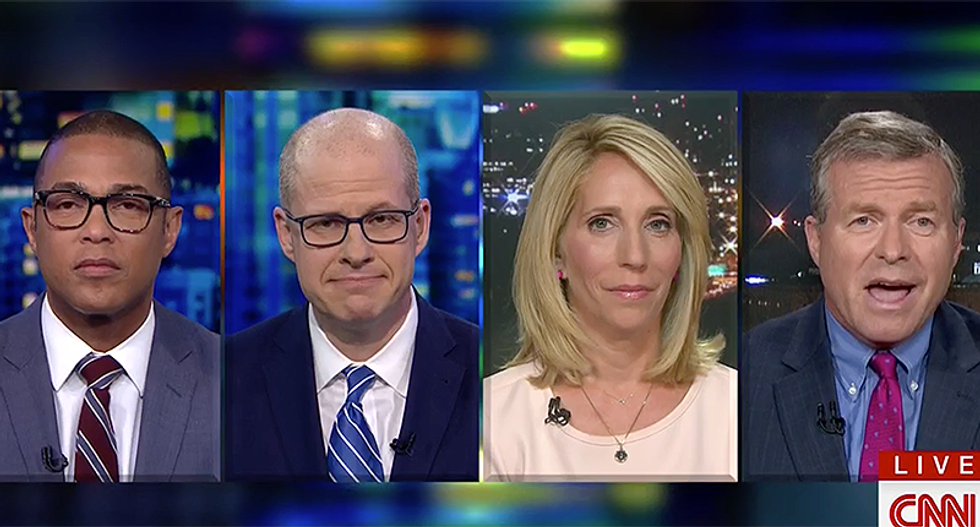 In wake of The New York Times report that President Donald Trump had raw data that Vladimir Putin ordered the Russian attack, conservatives on the CNN panel were stumped.

"Don, there have been so many crazy, offensive things that have occurred in the Trump administration," Began Boot after listening to Sarah Huckabee Sanders' press briefing Wednesday. Sanders revealed that Trump was entertaining the idea that he would hand over former Ambassador Michael McFoul to the Russians for interrogation.

Boot went on to call it maybe the "craziest and most offensive" thing they have done in office yet.

"It boggles the mind that Vladimir Putin makes this absurd request to basically allow his agents to harass and persecute a former U.S. Ambassador to Russia who has served this country honestly and instead of saying, 'Go jump in a lake,' Donald Trump apparently says, 'we'll consider this request.' Seriously? This is yet more evidence that he is not doing his duty as commander in chief. He's betraying his oath of office, not protecting his country. This is so crazy, I can't even begin to say how crazy this is."

Bash agreed, noting, "there are not enough synonyms of 'crazy' to explain how crazy this is."

Former Rep. Dent said that there was strong push-back in wake of the joint press conference with Putin on Monday, but Republicans in Congress have since gone limp.

"We saw all these walk-backs or all these people going on mop duty to try to clean it up, only making things worse," Dent continued. "I can't explain it. I think it's a time like this that Republicans need to stand up and defend western values, defend NATO, defend the international order, and certainly push back on Vladimir Putin who is trying to undermine American power and influence anywhere he can around the world. What's so hard about this?"

'How will the court survive?' Justice Sotomayor nails anti-abortion attorney over 'stench' of politics

Justice Sonia Sotomayor warned on Wednesday that overturning abortion rights would leave a "stench" that might destroy the legitimacy of the U.S. Supreme Court.

The justice made the arguments while grilling Mississippi Solicitor General Scott G. Stewart about the state's 15-week abortion ban in a case known as Dobbs v. Jackson Women's Health Organization.

The last few weeks we have seen the media work itself into something of a frenzy in an attempt to force a "reckoning" on the matter of the Steele Dossier, the opposition research document prepared by former British intelligence agent Christopher Steele about then-candidate Donald Trump. I'm sure I don't need to go into detail about that chapter in the Trump era. You'd have to have been in a coma not to have heard more about it than you ever cared to. Suffice to say that it was the source of the rumor about the infamous "pee tape" which offered many a late night comedian an uproarious punchline.

It's hard to know exactly what precipitated this sudden desire to have the media don a hair shirt over their coverage of the dossier, but it seems to stem from a recent ABC interview with Steele and the recent indictments of a handful of people by Special Prosecutor John Durham for lying to the FBI about it. Durham's inquiry into what Trump called "the oranges of the investigation" has been going on for years now with very little to show for it and according to those who have followed the cases closely, like journalist Marcy Wheeler, there is every reason to believe that the probe will end up being a dud.