Fox & Friends hosts praise Trump attempted cleanup of Putin surrender: ‘He admitted he made a mistake!’ 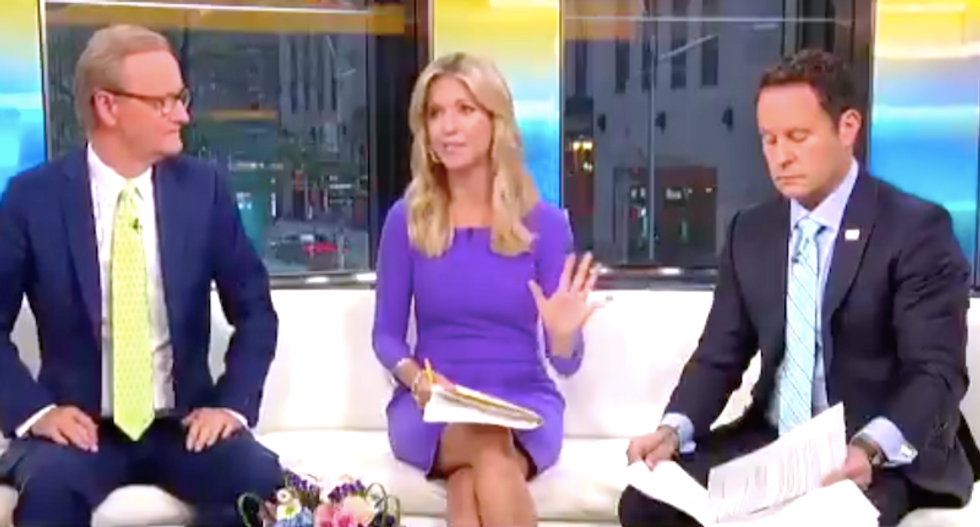 The hosts of President Donald Trump's favorite morning news show gushed with praise for his attempt to walk back his defense of Russian president Vladimir Putin against U.S. intelligence and law enforcement agencies.

Trump insisted Monday in Helsinski that he believed Putin's denials of election hacking, but Tuesday read a statement claiming that he had misspoken in one particular remark questioning Russian interference in the election.

"For the president who never admits he's wrong, yesterday he admitted he made a mistake," said "Fox & Friends" co-host Steeve Doocy. "He misspoke."

Co-host Ainsley Earhardt felt confident that Trump had seen the indictments last week of 12 Russians for election hacking and agreed with the grand jury's conclusion, and she said the president's critics looked silly for thinking otherwise.

"Everyone went 'what?'" Earhardt said. "'They are behind the meddling, we have proof of that, our own intelligence is saying that.' Then the president, that's when he made that clarification, saying I didn't mean that."

Doocy expressed regret for questioning the president on the previous morning's program.

"That's why yesterday on this program we said it's so puzzling the president would not say that Russia was behind the meddling, because he has said there was meddling, and it was Russia," Doocy said. "He has said that a number of times. Yesterday he made that very clear he had misspoken, because it's something very important. He used a double negative."

President Trump doubles down on his support for intelligence agencies and clarifies his comments from Monday’s pres… https://t.co/Skd650YpY8
— FOX & friends (@FOX & friends)1531910400.0