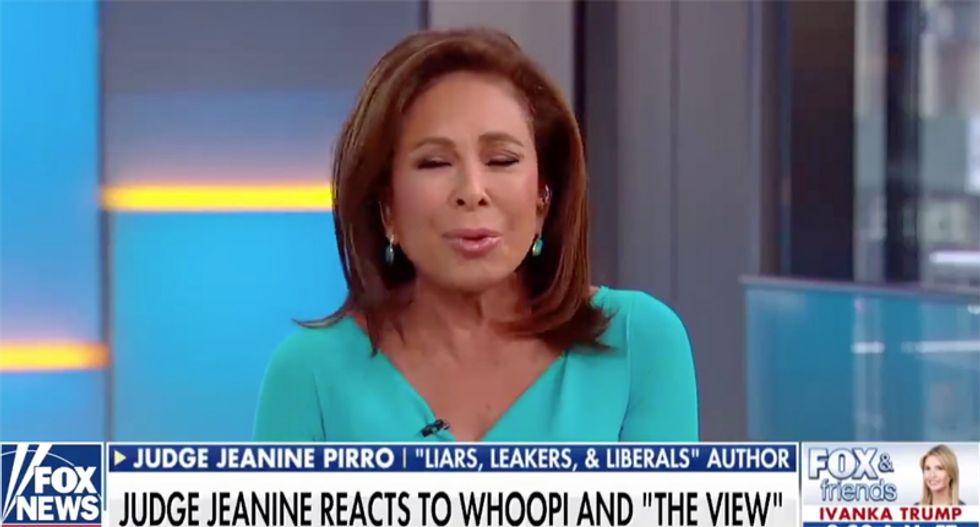 Fox News personality Jeanine Pirro argued she was entitled to deference when spreading her message as she explained on "Fox and Friends" Friday morning.

The host of "Justice with Judge Jeanine" after Whoopi Goldberg abruptly ended a segment on ABC's "The View" on Thursday after a meltdown while she promoted her sensational new book titled, Liars, Leakers, and Liberals: The Case Against the Anti-Trump Conspiracy.

After being shut down on the popular daytime show, Pirro appeared on Sean Hannity's Fox News show on Thursday night to complain about the incident.

“I’m still reeling from it to be honest with you," Pirro told the sympathetic Hannity. "I went on thinking that we would have a discussion about the book. The truth is, that it was an attack on Donald Trump, and then on me."

Friday morning, "The View" host Whoopi Goldberg said, "look, you can come to this show, we treat everybody with respect -- but you cannot come and call people names, you cannot point at people, you can't do this to people."

Also on Friday, Pirro used another Fox News show to bellyache about getting ejected.

"I don't understand where the anger comes from," the Liars, Leakers, and Liberals author said said on "Fox and Friends."

"I didn't deserve to be thrown out," Pirro complained.

"We can't treat people like that, we just can't," she continued.

"To be thrown off like that is disheartening, America is better than this," Pirro said.