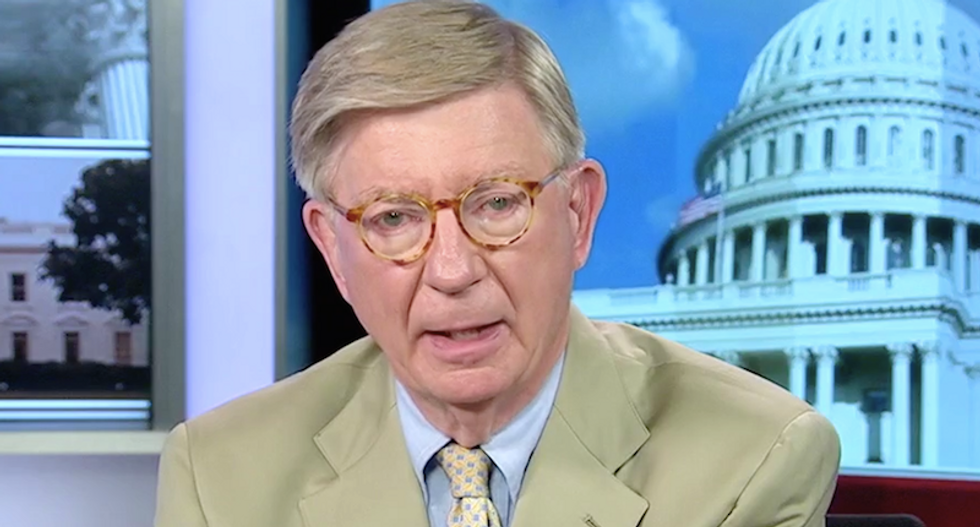 The ex-Republican blasted the president Tuesday in the Washington Post as a "sad, embarrassing wreck of a man," and he ridiculed GOP lawmakers for defending Trump for siding with Russian president Vladimir Putin against U.S. intelligence and law enforcement agencies.

The president read a statement Tuesday attempting to walk back his doubts about Russian election interference, although he still questions whether Kremlin agents hacked state election systems and Democratic organizations.

"He had to spend yesterday taking back what he really meant to say and what he, in fact, did say," Will said. "It's hilarious to see Sen. (Marco) Rubio and then Sen. (Rob) Portman come out and use the word clarified as to what the president just did."

Will said GOP lawmakers are scared to stand up to the president because they're "terrified" of Trump and his supporters.

"Republicans on Capitol Hill are terrified," Will said. "They have individual terror and collective terror. The individual terror is that they will be individually attacked by the president, thereby costing them a third of their vote. The collective terror is, that if Congress seems to turn on the president, Republicans in Congress, he will attack congress thereby depressing the turnout, thereby costing them the House, certainly, and perhaps the Senate."

Will said the president's insecurities were bottomless, and that explains everything about his behavior.

He also suggested that Trump appeared to be financially beholden to Putin -- and possibly others.

"The fact that he decided never to release his tax returns, we come to the conclusion -- we don't know what he's hiding, but obviously he's keeping something secret," Will said. "Obviously, he's hiding something, which licenses, it seems to me, responsible speculation about what he might be hiding."

Will said the president's decision to meet privately with Putin, without any advisers or secretaries present, was highly suspect.

"He's keeping something secret from Americans," he said. "It's reasonable to speculate why that is so."