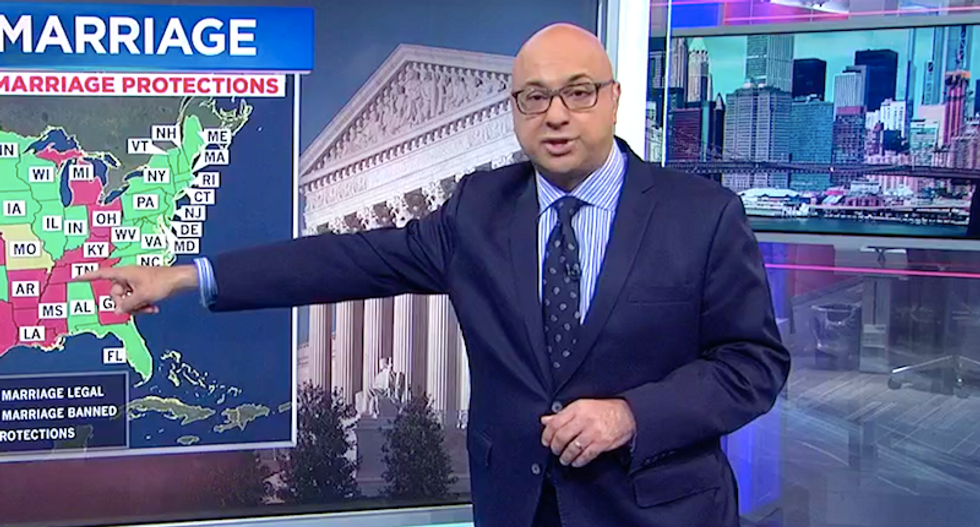 Velshi warned a newly conservative high court could undo the landmark Obergefell v. Hodges ruling to legalize same-sex marriage, and he said LGBT people could find themselves at the mercy of state laws.

"If you live in one of the states that either bans gay marriage or largely doesn't issue licenses, it's unclear whether it would be grandfathered in," Velshi said. "If it were not grandfathered in, or you weren't yet married, you'd lose a raft of protections throughout life with your partner."

The MSNBC host warned that same-sex couples could lose federal survivor benefits and pensions, and face other financial risks that heterosexual couples do not.

"Adoptions would become an issue," Velshi said. "Without a valid marriage, only one parent would be able to adopt a child, in which case, the parent not recognized as a legal guardian would lose custody rights."

Undoing Obergefell could risk the health of LGBT Americans, as well.

"Medical partners, if your partner falls ill you may not be able to visit them or make medical decisions on their behalf," Velshi said. "Health care for same-sex couples, those on their coverage plan could lose their coverage instantly."

He said same-sex couples could also lose spousal privilege and be forced to testify against their spouse.

"All of these rights that heterosexual couples take for granted could be nullified with one Supreme Court vote," Velshi said.

Sarah Warbelow, legal director for the Human Rights Campaign, said she believes same-sex marriage is settled law that one court ruling could nullify.

"What we're really worried about is the chipping away of rights under marriage," Warbelow said.

"It's this creation of skim-milk marriage that's really at risk for LGBTQ families and couples around the country," Warbelow said.

Velshi said he wasn't so sure.

"I appreciate that you don't want people to panic," he said. "But if I were involved in a same-sex marriage in one of those states, I'd be panicked. I'd just want to know, do I have to move to a different state?"